Warners Bros. Bugs Bunny 80th Anniversary Collection is a box-set of sixty remastered cartoons on Blu-ray discs that was released 1 December 2020. It includes three Blu-ray discs. A digital copy is included in the purchasing of a physical copy. Packaging includes a slip book, booklet, and a variety of figures, replicas, and memorabilia.[1]

The set was originally going to be a Blu-ray rerelease of an earlier DVD set, The Essential Bugs Bunny, with a Funko! POP figure as a way to "appeal" to collectors. Jerry Beck told the Warner executives that to appeal to collectors, the set should include cartoons that had not yet been released to modern home video.[2]

It includes twenty previously released cartoons that are considered "essential", as they are generally considered some of Bugs Bunny's best cartoons. An additional forty cartoons that were either only on DVD, never remastered or not released in the proper Academy aspect ratio (1:37:1) are also in the collection, some of which had already debuted on HBO Max earlier that year. The collection spans from the early cartoons to the end of Bugs' tenure.

A handful of the cartoons on the second and third discs were newly restored for this collection by HBO Max. These cartoons have had their titles poorly redone in Photoshop, resulting in several errors with the titles such as Bugs' animation skipping or looping frames in the "Bugs Bunny In" title card, fake fade-outs, etc. This has caused a bit of controversy amongst fans.

The set includes numerous special features and commentaries. Animation historian Jerry Beck teased that fans who own previous collections now own ninety percent of Bugs Bunny's filmography, with the exception of a few cameo appearances that Bugs Bunny had in other projects.[3]

The collection has an exclusive Diamond Collection Funko!POP doll of Bugs Bunny in a suit covered with glitter. The inclusion the doll has caused minor controversy with collectors due to the cost of the set, with some refusing to buy it for that reason. 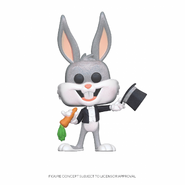