Somewhere in the Pacific, Bugs is floating inside a box, singing to himself. He encounters an island, swims towards it, and praises the peace and quiet, until bombs begin exploding. Bugs ducks into a haystack, but comes face-to-face with a Japanese soldier. The soldier chases Bugs all the way to a rabbit hole, where the soldier dumps a bomb inside. However, Bugs blows the soldier up with the bomb that he used. When the soldier tries to swing a sword at Bugs, Bugs appears as a Japanese general, but is soon recognized by his trademark carrot eating, prompting the soldier to ask him, "What's up, Honorable Doc?"

Bugs jumps into a plane and the soldier also jumps into a plane. However, Bugs ties the soldier's plane to a tree, causing the plane to be yanked out from under him. The soldier parachutes down, but is met by Bugs in mid-air, who hands "Moto" some 'scrap iron' which causes the soldier to fall. Bugs paints a Japanese flag on a tree to denote one soldier down. Bugs runs into a sumo wrestler, whom he confidently faces off against. After being beaten by the sumo wrestler, Bugs dresses as a geisha girl and knocks the wrestler out, who paints a second flag on the tree before passing out.

Seeing a bunch of Japanese landing craft making their way to the island, Bugs thinks of a plan to get rid of all of them. He comes out in a 'Good Rumor' truck, which plays Mozart. Bugs hands each of the Japanese an ice cream bar with a grenade inside it, calling them racial slurs whilst doing so. All the Japanese are then killed by the explosions, except for one who was later killed after redeeming a 'free' ice cream bar from Bugs. Having painted dozens of Japanese flags on the trees denoting all the downed enemy, Bugs comments again about the peace and quiet saying "And if there's one thing I CAN'T stand, it's peace and quiet!"

Bugs spots an American battleship in the distance and raises a white flag, yelling for them to come get him, but they keep going. Bugs is then furious about it and then says "Do they think I want to spend the rest of my life on this island?" With this remark, a female rabbit dressed in a more Hawaiian outfit appears saying, "It's a possibility!" Finally, Bugs then lets out a wolf howl, pulls down the distress flag, and goes running after her.

(1991) LaserDisc
The Golden Age of Looney Tunes Volume 1, Side 7, Bugs Bunny by Each Director

(1992) VHS
The Golden Age of Looney Tunes Vol. 7: Bugs Bunny by Each Director

The Japanese American Citizens League protested the short's inclusion on the Bugs Bunny by Each Director VHS, feeling it was inappropriate to market it among the more standard, family-friendly shorts. While MGM/UA initially defended their decision, they later voluntarily pulled the tape and the box set containing it from distribution. Later printings of The Golden Age of Looney Tunes Volume 1 LaserDisc set replaced the short with "Racketeer Rabbit"

As a result of the LaserDisc withdrawal, Turner Entertainment banned the cartoon from television syndication in 1993 and is still banned to this day (even plans to have it air on the 2001 June Bugs that was supposed to have every Bugs Bunny cartoon ever made fell through when AOL Time Warner announced that twelve Bugs Bunny cartoons featuring racial stereotypes were going to be shelved. It was also going to air on a ToonHeads episode about the twelve banned Bugs shorts, but the series was canceled and the episode was shelved). In spite of this, the short did see limited broadcast on Toonheads during a special on World War II cartoons, but only in clips for three montages: one about how World War II cartoons had gags about and references to scrap metal recycling (the clip used was Bugs handing an anvil to a Japanese pilot parachuting down and saying, "Here's some scrap iron for Japan, Moto!"), another that showed how Japanese caricatures in cartoons were unflattering and cruel (the clip used was Bugs handing a Japanese soldier a round bomb), and the montage at the end that explains that, because of the outdated references and outrageous stereotypes, most WWII-era cartoons from Warner Bros., MGM, and Fleischer Studios are rarely shown on American television (the clip used was Bugs dressed as a geisha and flirting with the sumo wrestler). 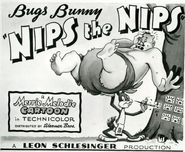