Bugsy and Mugsy is a 1957 Looney Tunes short directed by Friz Freleng.

Over Bugs Bunny's hole stands a sign presumably constructed by Bugs reading "Moved to Drier Quarters — Bugs Bunny". The presence of the sign is justified by the fact that it is heavily raining.

Under the floor of an empty house, Bugs comments on the dryness, peace and quiet of it, "Dry as a bone. What more could a rabbit want?" Bugs is very soon disturbed, as a pair of fugitives from the law soon enter it, assuming it to be entirely abandoned. These criminals are Rocky and Mugsy, who have just robbed a highly guarded repository of plenty of gold, gems and silver worth an undisclosed sum. Rocky closes the open blinds and states that, although he's given the police "the slip," they can't be allowed to know that he and Mugsy are hiding there; at least not from his point of view. He tells Mugsy to "toin it on the radio," and they hear the radio announcer saying that the police believe Rocky and Mugsy to have been the thieves, and nearly get as far as mentioning where the police last saw them, before Rocky makes Mugsy "toin it off the radio."

Mugsy asks, "But that was some haul, wasn't it, boss?"

"Yeah," Rocky answers. "All 14-carat." He uncovers the stolen loot, and he and Mugsy stare at it.

The "carrot" part has aroused the interests of Bugsy, whose head pops out from under the floorboards. He remains unseen by Rocky and Mugsy. He mistook the purity level of minerals for the vegetable that rabbits and hares are all too well known for fondness of. This is where Rocky makes a relatively small, and yet colossally damaging to Mugsy and himself, mistake. He tells Mugsy to "Get some shut-eye if we're gonna pull that big job tomorrow." They certainly assume themselves to be alone in the house.

Bugs takes an old-fashioned telephone and slips one end next to Rocky's ear, keeping the other end in his own hole. Face impassive, Rocky is sitting in the only chair and Mugsy is lying down on the couch with a goofy grin on his face. Bugs whispers to Rocky that "You're crazy to trust your pal Mugsy with that suitcase of jewelery. Don't make me laugh!" Rocky sits bolt upright in the chair, but assuming he heard a random voice, shrugs and goes back to sleep. But Bugs won't let him. He snickers, "Look at 'im, just lyin' there pretending he's asleep. And all that time he's actually thinking. Not just that. He's gettin' ideas." However, Bugs pulls the cord away from Rocky before he can see it. Assuming Bugs' words to be true, Rocky gets out of the chair, walks over to Mugsy and the sofa, and rudely awakens his partner by slapping him three times in the face. "That'll teach ya's to get ideas." Mugsy protests that he doesn't get ideas. However, Rocky, having been fooled by Bugsy, tells Mugsy to see to it that he doesn't. He storms away to leave Mugsy looking confused.

Next, Bugs glances out of his hole and, seeing that the two criminals are sound asleep, tiptoes out, carrying a giant battleaxe. This he places with extreme caution in Mugsy's right hand. Then he dives back under the floorboards, retrieves the old phone and informs Rocky that Mugsy isn't called "the Detroit Butcher for nothin'. Don't be fooled by dat smooth talk. He's prob'ly waitin' for you to fall asleep — then ... KER-RIECCKKK!" Rocky once again thinks that Mugsy is actually out to maim him. He again sits up and notices the axe Mugsy is holding. However, rather than let it remain in Mugsy's clumsy hands for another second, Rocky seizes the weapon and slices one of the couch's arms cleanly almost in half. He then pronounces that, "Your dirty scheme didn't work, did it? Now go back to sleep." Mugsy merely chuckles that Rocky is "a million laughs."

Bugs is in the attic of the old house with a screwdriver, preparing to unscrew the screws connecting the light over Rocky's head to the roof of the main room. Mugsy, who has suddenly awoken, but seeing his boss to be still in the chair, chuckles, "That Rocky," again. Bugs begins to unscrew the light. Mugsy sees the screws coming loose, and so, knowing that Rocky will blame him if the light falls on him, grabs his own screwdriver and a ladder and climbs up, tool in hand, intending to screw the light back in. But Bugs is too quick for the hulking accomplice, as he finishes with the last screw before Mugsy gets to it. Looking up, Rocky sees Mugsy on the ladder, thinking that HE unscrewed the light, so he tells him to "C'mere." Mugsy does so, and when he does, he tries to explain only to be kicked up high into the air by Rocky, who then screams, "NOW GO TO SLEEP!"

Bugs switches Rocky's cigarette with a dynamite stick. Then he walks over to Mugsy and effects Rocky's voice, saying, "Hey, Mugsy, c'mere. Gimme a light." Having clearly worked with Rocky for years, Mugsy walks over to his boss with a match and verbalizes how glad he is that "you're not mad at me no more." He strikes the match and lights not a cigarette, but a stick of dynamite. The resulting explosion leaves them looking much the worse for wear; Mugsy moans, "Aw, now you're mad at me again!"

"Get in here," Rocky snaps. He shoves Mugsy into the next room over many screams of protest, beats him up, and ties his feet and hands together. The walls become knocked right through. Underfloor, Bugs "winces" pleasurably. "NOW GO TO SLEEP!!!" Rocky yells with great finality.

Bugs saws a perfect circle around Rocky's chair, only letting him see the tool near the end. Bugs then slips it into Mugsy's hands — and slips back beneath the floor — just in time for Rocky to open the door to the next room, see it in Mugsy's possession and proclaim, "I dunno how ya's done it, BUT I KNOW YA'S DONE IT!" He then beats Mugsy up some more, and storms out of the room.

Finally, Bugs pops out from under the floor, unties Mugsy and quickly pops a pair of roller skates to his feet. He then snatches a highly powerful magnet and drags it down with him. The skates feel the power of Bugsy's magnet; they skitter right to it; Mugsy is forced to stand up. For a split second, Rocky stares at Mugsy in complete bewilderment, then tells him to get off the skates; but the skates and, by extension, Mugsy, are controlled by the rogue underfloor magnet. Bugs drags the magnet several times towards Rocky so that Mugsy is forced to smash into him. Every time Mugsy skates into Rocky magnetically, his boss snarls and shoves him back. But Bugs simply drags the magnet over to Rocky again and again, thus necessitating multiple repeats of that cycle. Quite apart from the chaotic banging in that house, police cars suddenly pull up to it. A notice stating that the Public Health Department has condemned it is on the back of the building. A short time later, Rocky and Mugsy are in one of the cars; as it wails off, Rocky wonders out loud how the police knew where he and his partner were hiding. Mugsy begins protesting his innocence repeatedly, but Rocky cannot believe Mugsy's explanation. He shoves Mugsy down to the floor and jumps up and down on him.

Bugs remarks, "Isn't it amazin' what you can do with some wire and a few electric bulbs?" He had ingeniously hooked up bulbs and wires to the building and configured them so that they flashed the words "ROCKY'S HIDEAWAY". 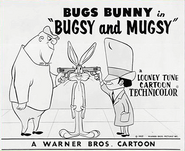