Bully for Bugs is a 1953 Looney Tunes short directed by Chuck Jones.

Burrowing his way to the Coachella Valley for the "big carrot festival therein", Bugs Bunny surfaces in the middle of a bullring during a bullfight between Toro the Bull and a very nervous matador who is being booed by the crowd for running away from the bull. Bugs famously declares he "shoulda make a left toin at Albuqoique". As he asks the matador for directions, the matador escapes into the stands, leaving Bugs to fend for himself against Toro. After irritating Bugs and getting a slap for "steaming up [his] tail," Toro rams the rabbit out of the bullring. As Bugs is hurtled into the air, mutters his famous line, "Of course you realize, dis means war," before landing miles away.

Toro takes his applause for claiming his latest victim, but it is short-lived because Bugs re-enters the bullring in matador garb. Bugs defeats Toro using an anvil hidden behind his cape. While Toro is still dazed from his collision, Bugs makes the bull follow the cape up to a bull shield where his horns pierce it. Bugs hits and bends the horns like nails and makes fun of Toro using puns ("What a gulli-bull, what a nin-cow-poop"), not knowing that the bull can detach his horns and strike back. While Toro sharpens his horns, Bugs interrupts him by placing an elastic band around the horns and using it as a giant slingshot to smack him in the face with a boulder. Toro charges back at Bugs. Bugs then returns, this time in a large sombrero doing a little dance and slapping Toro on the face to the tune of "Las Chiapanecas". Toro tries to punch him twice but is slapped each time. Bugs dances more and then disappears under the sombrero, but not before pinching Toro's nose.

While Toro once again sharpens his horns, Bugs has prepared a booby trap for the bull, composed of a double-barreled shotgun hidden behind the cape. Toro charges towards the cape, and somehow the shotgun previously in Bugs's hand enters Toro's body and stops at his tail, firing a bullet from one of Toro's horn when he flicks his tail (and the shotgun) on the ground. Now having the upper hand, Toro chases Bugs shooting at the hare, but Toro eventually runs out of bullets. Toro "reloads" by swallowing several "elephant bullets" (with explosive heads) but when he attempts to test-fire, he instead explodes, gun and all.

Bugs taunts Toro once again by calling him, among other things, an "ultra maroon," but realizes that he is cornered by the bull behind barred gates. Awaiting certain death (he writes a will and says his last prayers), Bugs miraculously opens the gates like a garage door, sending Toro out of the bullring and into the horizon. Toro runs back to the bullring, not anticipating that Bugs has laid axle grease, a ramp, and some platforms on the bull's path. The grease and ramp send Toro airborne over some glue, a sheet of sandpaper, a protruding matchstick, and a barrel of TNT which explodes when Toro flies by. Still in the air and in shock, Toro finally crashes into a wooden bull shield.

With the unconscious bull's hindquarters sticking out of the shield, the victorious Bugs holds up the cape with the words "THE END" etched on it. 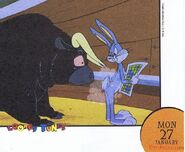 "Stop steamin' up my tail! What're ya tryin' to do, wrinkle it?!"
Add a photo to this gallery

Retrieved from "https://looneytunes.fandom.com/wiki/Bully_for_Bugs?oldid=188020"
Community content is available under CC-BY-SA unless otherwise noted.