Calamity Coyote (voiced by Frank Welker) is a fictional anthropomorphic coyote and a cartoon character who appeared on the early 1990s series Tiny Toon Adventures.

Like his mentor, Wile E. Coyote, Calamity has a penchant for inventing traps and other devices and never speaks (although he is voiced by Frank Welker, despite the fact that he never speaks, instead he communicates by laughing, yowling, or making other noises), communicating instead with written signs (although he has been seen singing along with other characters in a few episodes, though this might have well been lip-singing). His quest is to catch Little Beeper, a young roadrunner. He resembles a smaller, cuter gray version of Wile E., and also wears pink hightop sneakers. In one episode, fellow Tiny Toon character Elmyra Duff offered Calamity her allowance to catch Buster Bunny for her, but he fared about as well capturing Buster as he did with Little Beeper. Another episode reveals that Calamity had been chasing Little Beeper since infancy; this episode featured Calamity's life story (told while Calamity is plummeting toward a street from the top of a tall skyscraper), narrated by Wile E. himself. Unlike Wile E., however, Calamity seems genuinely competent and more technically proficient than the older coyote, even maneuvering himself out of his skyscraper plummet by switching Wile E. into his place. Other Tiny Toon characters have acknowledged him as a "science whiz," and even seem willing to trust their lives and well-being to his skills. Perhaps it is primarily his young age and inexperience -- along with Acme merchandise -- that have been the undoing of his efforts. At one point, he also had the misfortune of being mistaken as a boy skunk by Fifi La Fume, resulting in Calamity discovering what being chased really feels like.

Calamity getting chased by a love-struck Little Beeper 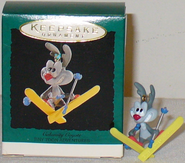 Artwork of Calamity by Jeff Pidgeon 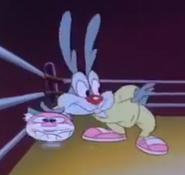 Add a photo to this gallery
Retrieved from "https://looneytunes.fandom.com/wiki/Calamity_Coyote?oldid=149594"
Community content is available under CC-BY-SA unless otherwise noted.