The title is a pun on "canned food."

Sylvester's family goes on vacation to California, but forgets to put him out. Sylvester abruptly notices this, finding that he is locked inside an empty house devoid of food with no milk being delivered for two weeks. Fortunately, he finds a cupboard full of canned tuna and cat food, but discovers that he also needs a can opener. He seemingly cannot find one, until he sees a mouse with one. He begs the mouse to give it, but the mouse throws it in his hole. Sylvester frantically tries and fails to retrieve it and the mouse casually walks away. Sylvester very angry gives chase and crashes into the mouse's hole while trying to catch him.

Sylvester tries vainly to open the tuna by beating it against the floor and jumping on it. When this doesn't work he tries to chop it with an axe, but when he's about to swing, the blade flies off and goes out the mail slot. The mouse appears to be giving the can opener and when he tries to retrieve it the mouse grabs it and runs back into his hole causing Sylvester to crash into it again. Next he tries using a bent coat hanger to retrieve the can opener, however the mouse hooks it to a live wire and he receives an electric shock when the wire touches another. Sylvester then sets up a piano to drop on the can, just before the mouse offers the can opener, prompting Sylvester to release his hold on the rope attached to the piano, thereby crushing him. He then attempts to cut a larger hole in the wall to enter the mouse's home, but is foiled by the mouse simultaneously cutting the floor beneath Sylvester's feet.

His next attempt involves dynamite, which predictably backfires after the mouse inflates and pops a paper bag making him think the dynamite had already blown. His following attempt, involving a vacuum, results in Sylvester being sucked in, along with hot coals, and clumsily tumbling down into the basement while trying to hit the mouse with a golf club. However, the angrily persistent cat (thinking that that's the last straw) returns with an armful of dynamite and fireworks, but they blow prematurely while he's lighting the fuse, resulting in a tremendous explosion, but he does finally recover the can opener in the process. Going to the cupboard and yelling "I got it" along the way, he finds it locked, and the mouse now holds the key. Sylvester screams out in anguish and faints onto the floor, while the mouse merely shrugs and twirls the key on his finger. 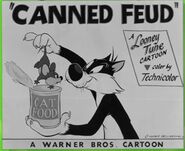 Title (Blu-ray Version)
Add a photo to this gallery

Retrieved from "https://looneytunes.fandom.com/wiki/Canned_Feud?oldid=241473"
Community content is available under CC-BY-SA unless otherwise noted.