The title is a play on the 1945 John Steinbeck novel Cannery Row.

Two hungry mice, Jose and Manuel, see a billboard for Mayor Raton's Gran Cheese Fiesta advertising free cheese for all. When they try to enter, the Mayor kicks them out. Then the Mayor tells his cheese committee to bring in the cheese to the fiesta. A handful of bedraggled mice enter without the cheese and with a broken "CHEESE COMMITTEE" sign and explain that a ferocious cat, namely Sylvester, is now guarding the grocery store, hence why the couldn't get the cheese. Jose and Manuel offer to call their friend Speedy Gonzales, the Fastest Mouse in all Mexico, to steal the cheese for the Mayor.

Speedy runs to the Cheeseria, races past Sylvester, and steals some cheese. Sylvester spreads a box of tacks around the street, but when Speedy returns, Sylvester chases him and steps on the tacks himself. As he pulls the tacks from his paws, Speedy jokes about his "tacks problem" and steals some more cheese.

Sylvester loads a cannon, but gets himself stuck in the barrel. Speedy offers to help and fires the cannon. The cannonball somehow slips past the cat, merely shaving off some of his fur, but when Sylvester climbs out of the cannon to chase the mouse, the cannonball returns and conks him on the head.

Sylvester lays mousetraps around the store but is inadvertently stuck in the corner. Speedy returns and runs past the traps to steal more cheese. Sylvester tiptoes carefully around the traps, but the rodent throws a ping-pong ball into the store to set off a chain reaction of traps snapping the cat.

The Mayor awards Speedy a special badge of honor, and rewards Jose and Manuel by making them Official Cheese Inspectors. They brag about their new jobs, until Speedy shows them that his badge reads Chick Inspector and he goes to inspect a chick. 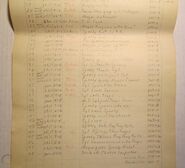 Retrieved from "https://looneytunes.fandom.com/wiki/Cannery_Woe?oldid=231063"
Community content is available under CC-BY-SA unless otherwise noted.