Captain Star Johnson is a secondary league character on Duck Dodgers. He is voiced by John O'Hurley.

Star Johnson is a highly decorated space captain and the rival of Duck Dodgers, and was first seen in "The Trial of Duck Dodgers", as the captain who brought Dodgers to trial over Dodgers' incompetence. The case was, however, dismissed.

Star later appears flirting with another female officer called Tina in "The Green Loontern", and despite his rivalry with Dodgers, teams up with him during General Z9's coup of Planet Mars, and again when competing with Dodgers in the Captain of the Year award in The Best of Captains, the Worst of Captains. Although neither won, they did both beat rival captain, Captain Dallas Rodman. 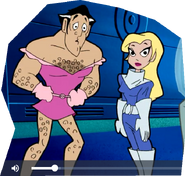 Add a photo to this gallery
Retrieved from "https://looneytunes.fandom.com/wiki/Captain_Star_Johnson?oldid=193807"
Community content is available under CC-BY-SA unless otherwise noted.