watch 02:34
Wiki Targeted (Games)
Do you like this video?
Play Sound

Carl W. Stalling (10 November 1891 - 29 November 1972) was a noted American composer and arranger of music for animated cartoons. He is most closely associated with the Looney Tunes shorts produced by Warner Bros., where he worked, averaging one complete score each week, for twenty-two years. Stalling started his career as an accompanist for silent films on the piano and theater organ in Independence, Missouri. It was there that he met and befriended a young Walt Disney who was producing animated comedy shorts in the Kansas City region. Stalling composed several early cartoon scores for Walt Disney, including Plane Crazy and Gallopin' Gaucho in 1928, (but not Steamboat Willie, Disney's first released sound short). Early discussions with Disney about whether the animation or the musical score should come first led to Disney creating the "Silly Symphonies" series of cartoons. These cartoons allowed Stalling to create a score which Disney handed to his animators. While there, Stalling pioneered the use of "bar sheets" which allowed the musical rhythms to be sketched out simultaneously with the storyboards for the animation. He left Disney after only two years, at the same time as animator Ub Iwerks. Finding few outlets in New York, Stalling rejoined Iwerks at his own studio in California, while freelancing for Disney and others. In 1936, when Iwerks was hired by Leon Schlesinger, who was under contract to produce animated shorts for Warner Bros., Stalling went with him to become a full-time cartoon music composer, with full access to the expansive Warner Bros. catalog and musicians. He remained with Warner Bros. until his retirement in 1958. His last cartoon was To Itch His Own, a cartoon directed by Chuck Jones which featured the world's strongest flea, the Mighty Angelo. Stalling was consistently an innovator. He was the first music director to extensively use the metronome to time film scores. He is one of three composers, along with Max Steiner and Scott Bradley, credited with the invention of the click track.[citation needed]

His stock-in-trade was the "musical pun", where, much to the annoyance of his fellows, he used references to popular songs, or even classical pieces, to add a dimension of humor to the action on the screen. Working with legendary directors Tex Avery, Bob Clampett, Friz Freleng, Robert McKimson, and Chuck Jones, he developed the "Looney Tunes" style of very rapid and tightly coordinated musical cues, punctuated with both instrumental and recorded sound effects, and occasionally reaching into full blown musical fantasies such as Rabbit of Seville, A Corny Concerto and What's Opera, Doc?. Stalling was a master at quickly changing musical styles based on the action in the cartoon. His arrangements were very complicated and technically demanding. The music itself served both as a background for the cartoon, and provided musical sound effects. The titles of the music often described the action, sometimes forming jokes for those familiar with the tunes.

Stalling made extensive use of the many works of Raymond Scott, whose music was licensed by Warner Bros. in the early 1940s. Jones and the other Looney Tunes directors sometimes complained about Stalling's proclivity for musical quotation and punning. His contemporaries, especially Scott Bradley, were considered more "serious," writing more original melodies and utilizing more high-brow compositional methods. In an interview, Jones complained: "He was a brilliant musician. But the quickest way for him to write a musical score [...] was to simply look up some music that had the proper name. If there was a lady dressed in red, he'd always play "The Lady in Red." If somebody went into a cave, he'd play "Fingal's Cave." If we were doing anything about eating, he'd do "A Cup of Coffee, a Sandwich, and You." I had a bee one time, and my God if he didn't go and find a piece of music written in 1906 or something called "I'm a Busy Little Bumble Bee." (Adamson, quoted in Goldmark, p. 22) Nevertheless, Stalling is remembered today for setting music to cartoons that have remained wildly popular to this day, and are often remembered for their musicality. His scores are heard constantly, both in re-runs of classic cartoons, and recycled in new Looney Tunes compilations and features such as Looney Tunes Back in Action. Noted film critic Leonard Maltin, on one of the special segments of the DVD series Looney Tunes Golden Collection, pointed out that listening to the soundtracks of the Warner cartoons was an important part of his musical education; and the use of the full Warner Bros. Orchestra resulted in a richness of sound that is often lacking in more modern cartoons. After Carl Stalling retired, he was replaced by Milt Franklyn, who had assisted Stalling as arranger since 1936. Carl Stalling died at the age of 81. 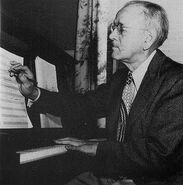 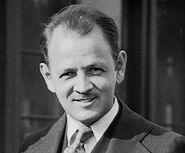 Add a photo to this gallery
Retrieved from "https://looneytunes.fandom.com/wiki/Carl_W._Stalling?oldid=274734"
Community content is available under CC-BY-SA unless otherwise noted.