Cat-Tails for Two is a 1953 Merrie Melodies short directed by Robert McKimson.

Benny heads out in the evening with another cat, George. George and Benny are walking down a pier looking for food when they find a Mexican ship. Figuring the ship will have plenty of Mexican mice, i.e. "Mexican food" (Benny: "It gives me the heartburn and I love it!"), they climb on, only to find an unkempt mouse calling himself "Speedy Gonzales, fastest mouse in all Mexico." George and Benny go through numerous attempts to capture Speedy, who always outwits them. Speedy comes to think of them as private entertainment, at one point declaring "I like those fellows. All the time having fon (fun)!" When they have had it with Speedy their final plan was to run a pipe into Speedy's hiding place (to the tune of Raymond Scott's "Powerhouse"), but Speedy grabs a wrench and bends the pipe back around to the cats, unbeknownst to them. George starts shoving a lot of dynamite into the pipe, resulting in a mountain of TNT piling up behind him and Benny. When George is done shoving dynamite through the pipe, he lights the last stick with a match, and the mountain of dynamite blasts him and Benny up into the air. As they descend, Benny asks George about their Mexican dinner, with George responding "I kind of lost my appetite for Mexican food," before both cats plunge into the harbor. A smug Speedy declares "I love those fellows. They're so see-lee (silly)!" 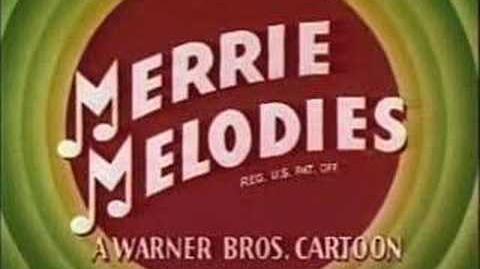 Early design for Speedy Gonzales
Add a photo to this gallery

Retrieved from "https://looneytunes.fandom.com/wiki/Cat-Tails_for_Two?oldid=204867"
Community content is available under CC-BY-SA unless otherwise noted.