Looney Tunes Wiki
Register
Don't have an account?
Sign In
Advertisement
in: 1958, Cartoons directed by Chuck Jones, Shorts,
and 13 more

The title is a play on "cat food," and the feud or fight between the cat and dog.

Hector is a bulldog working at a construction site. He finds a kitten named Pussyfoot, to whom he gives a wiener. Claude Cat sees Pussyfoot and attempts to take the wiener away from her. To defend the kitten, Hector fights the cat on the steal beams of a construction building.

Pummeling scene that was cut when aired on ABC 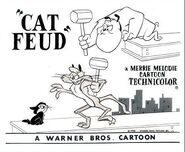