The title is a play on the phrases "castaway" and "Anchors Aweigh," alluding to the nautical theme.

Sylvester brings his son to the wharf to scavenge for fish heads. Junior laments the fact they have to scrounge for food and wishes they had a real home. When they see a ship advertising for a mouser, Junior urges his dad to apply. Sylvester doesn't want to work, but agrees to take the job when Junior says he'll help.

Sylvester lounges aboard ship while his son chases the mice. When Junior bemoans the iniquity, Sylvester says Junior is a little cat so he should handle all the little mice, and that he himself is a big cat so he'll take care of any big mice that come along. Soon Junior chases a little mouse into a crate in the cargo hold. He opens the crate to get the mouse, but out hops Hippety Hopper, a baby kangaroo. The cats think it's a giant mouse, so Sylvester tries to hold up his end of the bargain, but Hippety pummels him.

Sylvester now strikes a new bargain. Since there are a whole bunch of little mice, he should take care of them, and Junior can take care of the big one. Junior agrees halfheartedly and soon encounters Hippety again. He notices that Hippety imitates his actions, so he starts dancing and leads the kangaroo back into its cage. He proudly shows it to his father, who again tries to uphold his end of the bargain. Sylvester chases a little mouse around the hold until it scurries into a crate of Super Muscle-Building Vitamins...

When this cartoon aired on CBS's The Bugs Bunny/Road Runner Show, the part near the end where the mouse that Sylvester chases runs into a crate filled with muscle-building vitamins and beats Sylvester up with his newfound strength was cut to remove the mouse running into the crate and the sound of him swallowing the pills, making it obvious that something is missing.[1] 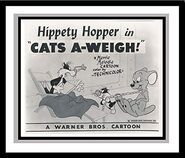 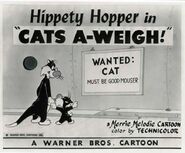 Retrieved from "https://looneytunes.fandom.com/wiki/Cats_A-weigh!?oldid=224615"
Community content is available under CC-BY-SA unless otherwise noted.