Inki is out hunting for food with his pet dinosaur. While the two are walking, a volcano splits and reveals a Minah Bird that has a peculiar hopping walk. Inki chases after the bird but is stalked by a sabertooth lion that wants Inki's bone in his top knot.

The lion chases Inki and vice versa. While constantly running into a caveman who is trying to cook a stew. The dinosaur is also out to get the Minah Bird, but is caught by the bird himself.

The caveman who is cooking the stew finally catches Inki and the lion because they keep ruining his stew. However, he discovers that the bird has eaten all of his stew. The bird walks away hiccuping. 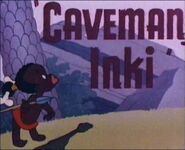 Title card (from an sbt airing)