Bob Clampett minted the scenario that Charlie Dog would later inherit in his cartoon short "Porky's Pooch", first released 27 December 1941. A homeless hound pulls out all the stops to get adopted by bachelor Porky Pig (eventually failing). Mel Blanc, Joe Alaskey and Eric Bauza would provide the dog's gruff Brooklyn Bugs Bunny-like voice and accent, giving him a sly and clever disposition.

However, as he did for so many other Looney Tunes characters, Chuck Jones took Clampett's hound and transformed him into something new. Jones first used the dog in "Little Orphan Airedale" (4 October 1947) which saw Clampett's "Rover" renamed "Charlie." The film was a success, and Jones would create two more Charlie Dog & Porky Pig cartoons in 1949: "Awful Orphan" (29 January) and "Often an Orphan" (13 August).

Jones also starred Charlie without Porky in a couple of shorts: "Dog Gone South" (26 August 1950) which sees Yankee Charlie searching for a fine gentleman of the Southern United States, and "A Hound for Trouble" (28 April 1951) which sends Charlie to Italy where he searches for a master who speaks English.

In these five cartoons, Charlie Dog is defined by one desire: to find himself a master. To this end, Charlie is willing to pull out all the stops, from pulling "the big soulful eyes routine" to boasting of his pedigree ("Fifty percent Collie! Fifty percent Irish Setter! Fifty Percent Boxer! Fifty percent Doberman Pincher! But, mostly, I'm all Labrador Retriever!"). However, he is really a fast-talking obnoxious mutt.

Jones retired Charlie Dog in the 1950s, along with other humorous minor characters he had introduced in the 1940s, such as The Three Bears and Hubie and Bertie. He was turning his efforts to new characters, such as Pepé Le Pew and Wile E. Coyote and Road Runner. However, recent Warner Bros. merchandising and series and films such as episodes of Tiny Toon Adventures, the movies Space Jam (1996) (in the crowd scenes), and Tweety's High-Flying Adventure (2000) in Italy have brought Charlie back out of retirement.

Though Charlie did not appear in the Porky Pig cartoon "Dog Collared", the unnamed dog's personality is based on him and he portrayed a role similar to him.

In Daffy Duck and Porky Pig Meet the Groovie Goolies, Charlie is one of the knights of King Foghorn Leghorn.

Charlie made a cameo appearance in The Looney Tunes Show episode "Father Figures". He is in a pet store where he was attacked by Henery Hawk (who was looking for a chicken).

Charlie made a cameo appearance in the Looney Tunes Cartoons short "Happy Birthday Bugs Bunny!" He appears in the Season 2 short "Adopt Me!" 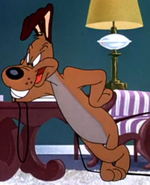