Chaser on the Rocks

Chaser on the Rocks

Chaser on the Rocks is a 1965 Merrie Melodies short directed by Rudy Larriva.

1. Wile paints a TNT stick to look like a glass of lemonade. He puts a straw and a lemon slice in it as well. Road Runner approaches and drinks the "lemonade". Wile E. presses on the detonator, but nothing happens. Wile takes the "lemonade" and starts to drink it when it explodes!

3. Wile sees an emergency fire hose, which he tries to use to get a drink. He hardly gets any water from it at first, but Road Runner turns it on maximum. The hose gets out of control, sending the Coyote flying! He sticks his finger in the nozzle, but it gets stuck. The water pressure pops it out and sends him falling off a cliff. 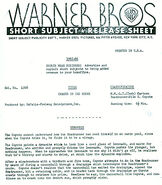 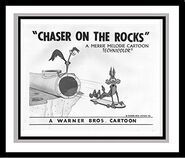