Cheese It, the Cat!

Cheese It, the Cat!

Cheese It, the Cat! is a 1957 Looney Tunes short directed by Robert McKimson.

Ralph Crumden drives home in a wind-up toy bus and carries a present inside. Since his wife Alice isn't home, he hides the present and goes to the people kitchen to get some cake for her surprise birthday party. He runs back through the door as a cat's paw tries to grab him. He remarks that there's never been a cat in the kitchen before, and strikes the paw with a large mallet.

Ralph travels through the walls, emerges on the kitchen counter, and travels down to the sink drain to enlist help from his friend Ned Morton, who works in the sewers. Ned shows Ralph his toy armored car with live ammo, and Ralph eagerly drives it up to Sam Cat. Sam merely holds its thumb over the cannon barrel, blowing up Ralph when he fires it.

To get back at him for his dumb idea, Ralph paints Ned with invisible ink and pretends Ned is now invisible. However, Ned just strides confidently up to Sam and plucks one of his whiskers. While Sam shakes his head in disbelief, Morton retrieves some cake, but as he returns home, he absent-mindedly eats it. Ralph gets mad at this stupidity and decides to try it himself. He makes Morton paint him with the invisible ink. Despite Morton's objection that he can still see him, Ralph charges boldly into the kitchen, then runs back screaming and disheveled.

Ralph then clings to a champagne cork as Morton pops it. Ralph sails across the kitchen, and into Sam's open mouth, then out through his tail! Morton does land at the fridge, but Sam immediately chases him back to his hole.

The mice then return through the walls to the kitchen counter. When Sam hops up to look for them, Morton pull his tail down into the garbage disposal and Ralph turns it on. Sam is sucked in and shaved nearly bald. As he clumps of his hair from the drain, Ralph and Ned steal a cupcake from the fridge.

When Alice returns home, Ralph has Morton put candles on the cake while he gives her his present. Alice is surprised, but so is Ralph, because Morton put firecrackers on the cake instead of candles. They toss the cake to each other a few times before shoving it out the door, and right into Sam's face. 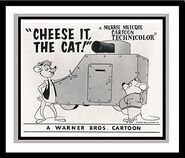