Porky runs a poultry farm. The farm is filled with nothing but chickens. Within that farm is a little duckling that is still inside its egg. It hatches when it skips into a tree. After that, it takes a picture of the audience. Everything is going fine on the farm, until a fox shows up and steals the duckling. Porky tries to get it back, but the fox keeps overpowering him. Luckily, the ducks arrive in time. They kill the fox and turn him into a fur coat. 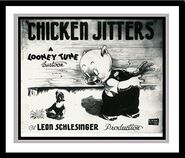