The title is a play on the dish "chili con carne."

Crow, an old friend of Speedy's, sits alone just outside of a cornfield, starving. Speedy comes across him, first telling him not to steal any corn, but upon hearing of how he's starving, suggests it'd be okay to steal one after all. Crow, however, does not want to intrude as he's afraid of the scarecrow. Speedy tries to show him that it is nothing to worry about, however after being shot at, he soon realizes that it's not just the scarecrow that worries him, but rather who's inside, the trigger-happy farmer Daffy Duck. Despite the danger, Speedy promises that he will get Crow something to eat.

First, they try sneaking in, but are spotted by Daffy in a helicopter, who lands and opens fire on Crow, until Speedy turns on the thresher, having landed on its conveyor belt. Daffy is pulled in, and his helicopter crushed into a skateboard and propeller-hat.

Next, Speedy and Crow fly overhead and try to steal the corn by dive bombing it. However, Daffy knew they'd do this and planted iron corn, which they slam into. He also planted dynamite to finish them off, but it backfires, blowing him up instead.

Daffy decides to finish the job himself. At first, Crow is unwilling to let him hurt Speedy and pulls a gun on Daffy, but upon being offered the entire cornfield and farm in exchange, allows it.

As Daffy chases Speedy, the mouse runs under the fence to Daffy's farm. When Daffy tries to cross the fence, Crow reveals that as new owner of the farm per their deal, he has disallowed trespassers including Daffy and is pointing to a sign and kicking him out at gunpoint. Speedy is at first relieved by this and tells Daffy to go away, but Crow says he's a trespasser and isn't allowed inside either. He then pushes Speedy over the fence to the rifle-wielding Daffy Duck and tells him to "get shot like a good little rodent." Crow tries to this justify this betrayal by saying there's hardly enough for him and his friends as is, revealing a murder of crows.

Speedy is chased away by Daffy, as he wonders "With friends like that loco crow, who needs enemies?" 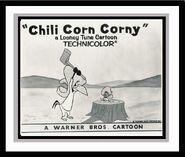