The title is a parody of animator Chuck Jones and the 1950s television series China Smith.

China Jones (Daffy Duck) is an Irish private eye working in the Far East. Jones, looking for a fast buck, finds his next call via a fortune cookie with a message inside telling Jones that there's a prisoner in a Chinese bakery and that the reward for freeing them is 150£. Jones is unsure where to look out of the thousands of Chinese bakeries, until his servant Willie bangs a drum stating that Jones could always find good hot tips at Limey Louie's bar. As China Jones leaves the restaurant, China Jones encounters Charlie Chung (Porky Pig) and thinks he's also working the same case hoping to get the supposed reward, but Jones rats Chung out.

As Jones heads off to investigate, Willie turns out to be a minion for Limey Louie, and tells him that China Jones is about to come. The ex-convict knew that Jones would fall for his trap and disguises himself as a widow who is grieving for her husband's alleged death. As China Jones comes in, Louie beats Jones up and comparing that to the way that the coppers treated Louie's "husband". Jones then asks for a hot tip, and Louie gives him a card where he can find the prisoner in Wong Way. Jones takes a taxi to the house in Wong Way to find a dragon lady. As Jones question why said lady is called a dragon lady, the lady breathes fire on Jones and says "Is answer question?" Jones, defeathered to a crisp, responds "Yep, is answer question. Hoo." Jones' next hot tip is to search Ho Down Wharf, where Louie cuts a rope on a ship that Jones was searching, causing Jones to plummet to the sea.

After Jones comes back from the wharf, Louie reveals himself as a former prisoner that Jones arrested earlier, and wants revenge on him. As China Jones escapes, he ends up falling down a trap door and into a pool of alligators, forcing Jones to bat off the alligators.

Charlie Chung comes back and Jones tells him to arrest Limey Louie. However, Chung explains that he was not a detective; he's a laundry man, and that the money he was talking about was Jones' laundry bill. Jones still refuses to pay the bill, telling Chung "Confucius say 'can squeeze blood from turnip!", but Chung holds out a club and tells Jones "Also say, 'better you press shirt than press luck!". Jones ends up as a "prisoner" in a Chinese laundry to pay the bill, asiding in "Chinese" with subtitles, "Help! - I'm being held prisoner in a Chinese Laundry!" 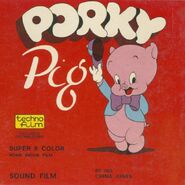 Title card (before remastering, from VHS)

Comparison of dragon lady scene from this short and "Mucho Locos" 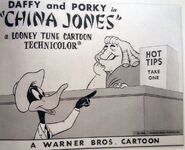