Looney Tunes Wiki
Register
Don't have an account?
Sign In
Advertisement
in: 1951, Cartoons directed by Chuck Jones, Cartoons that contain excerpts from "Powerhouse",
and 15 more

This article is about the 1951 Looney Tunes short. For the 1944 Private Snafu short, see The Chow Hound.

A large gluttonous dog bullies two unwilling parties, a frightened red cat and a tough-talking brown mouse, into various scams to obtain dinner from various residences. The scheme involves the dog, who forever complains that he is "starving," using the cat to pose as the pet for three residents and a municipal zoo. The cat poses as:

He looks through his little black book, then starts to complain that "week in, week out, it's the same thing; it's too slow!" He then sees a sign advertising a reward for lost animals and gets a sinister idea: holding the cat hostage for weeks, the dog accurately anticipates that the cat's "owners" will post rewards in the newspaper. "I've got plans for you!" the dog snarls.

The dog reads the missing animals article in the newspaper for the addresses and reward amounts from the owners and prepares to execute his big scam, telling his cat comrade "C'mon stupid; this is the payoff." The dog returns the cat to each of his masters, collects the reward and then reclaims his cat by means of a trick-bed, the largest of the rewards coming from the zoo. The dog, gloating that he is now "set for life" and will "never be hungry again," uses his ill-gotten gains to purchase a butcher shop, where "acres and acres" of meat hang from the ceiling.

At a "dog and cat hospital", the dog's gluttony has gotten the better of him, as his overindulgence on meat has rendered him grossly obese and unable to move a muscle. After two doctors diagnose "a distinct case of overeating" and depart from the operating room, two visitors march in: the cat and the mouse who both have the last laugh. The cat says, "This time, we didn't forget the gravy." The mouse jams a large funnel into the dog's mouth and smiles as the cat begins force-feeding the dog from an institutional-sized canister of gravy. The nervously-perspiring dog mutters "no" several times but is helpless to stop them as the dog gurgles. 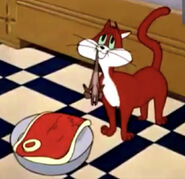