A man from the circus tries to catch customers' attention and points out some amazing acts and sights to see. A man offers balloons for children and realizes he is very high in the air before an off-screen voice begins to show off some acts. Such as a glutton who can eat even the hardest and sharpest of items. He takes a bow, revealing his very flabby body shape. Next is Hot-Foot Hogan, a man who can walk over hot coals in just his bare feet. Hot foot demonstrates, yelling the entire time until he sits back down again. Next is a special attraction, the sensational captain clamor, a human cannonball.

Said captain flies very far into the distance and circles the entire world before landing, showing the location stickers of places he has been. Inside a small zoo is being shown. A man sees a Do Not Feed the Monkeys sign but he disobeys it anyway until the monkey beats him up and calls the police. Next is an elderly stork who answers a nearby phone and struggles to talk to the person on the other line. A giant gorilla begins to approach the camera and is told of how threatening and dangerous he is, only to reveal he is actually a very nice gorilla!

The voice continues on to the flying cadenzas, a group of men who actually can fly like birds. They fly around the entire tent and do tricks. One of them ends up falling to the ground and the one who missed him hangs up a "partner wanted" sign. Next is Miss Dixie Dare, a daring woman who will pick up a handkerchief with her teeth while riding a horse. She manages to do it, but her teeth accidentally come out.

The next woman and her horse proceed to dance together before a lion tamer is shown with his lion. The tamer is doing very well, then forces open the lion's mouth, then sticks his head through it and pulls it out. This cheering makes the lion very happy so he tries it to the man, who seems to be highly surprised.

A group of elephants all line up by their tails and trunks, revealing a baby elephant second to last, as well as the Professor who is on the end. He then attempts to do one of his most dangerous tricks, allowing an elephant to sit on his head. But right before the elephant does it, he chickens out and begins to cry.

The final act consists of Count Maurice Leepov climbing a massive ladder onto a tiny board, then jump off of it into a very small tank of water. The band nearby begins to play music while the man is busy climbing up the ladder. He reaches the very top soon enough and then leaps from the board, apparently not making it. 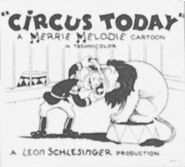