Claude Cat is a Looney Tunes and Merrie Melodies character.

The name Claude Cat is a pun on the homonym "clawed cat".

Claude had his origins in several other cat characters used by Chuck Jones from 1940 to 1945. These clawed cats were mostly similar in appearance and temperament, with black fur and anxious personalities. For example, in the 1943 film "The Aristo-cat" (the character's first speaking role), Chuck paired his unnamed cat against the mind-manipulating mouse duo, Hubie and Bertie.

Chuck redesigned the neurotic feline for the 1949 film "Mouse Wreckers", perhaps to distinguish him from Friz Freleng's popular puss, Sylvester. The short is another Hubie and Bertie vehicle, only this time, they antagonize Claude, drawn as he would appear in all future cartoons: yellow, with a red shock of hair and a white belly, though his exact markings would vary. In this, as in all future Claude Cat cartoons, Chuck's careful attention to personality is easily evident. Claude is a nervous and lazy clawed animal. His attempts to protect his home from the manipulative mice Hubie and Bertie prove futile as the rodents torment him by, among other things, putting aquariums in all the windows to make Claude think he's underwater or by nailing his furniture to the ceiling.

Chuck set the mice on Claude once more in the 1950 film "The Hypo-Chondri-Cat". This time, the miniature Machiavellis convince the neurotic Claude that he's dead. Claude would run afoul of the mice once more in 1951's "Cheese Chasers" and against another mouse duo in "Mouse-Warming" in 1952.

In another 1950 film, "Two's a Crowd", Claude is scared out of his mind by a diminutive dog named Frisky Puppy, newly adopted by Claude's owners. The main theme, however, is jealousy as Claude's attempts to oust the intruder repeatedly fail due to the cat's intense cowardice. A running gag has Claude repeatedly shooting up and clinging to the ceiling after the pup playfully comes up behind him and barks. Jones repeated the scenario with slight variations in "Terrier-Stricken" in 1952 and "No Barking" in 1954, the latter featuring a cameo by Tweety.

In future cartoons, Jones recast Claude as a silent villain, still possessing his full set of neuroses. This stage of the character's evolution is best exemplified by the 1954 film "Feline Frame-Up". Here, Claude convinces his owner that fellow pet Marc Antony is trying to eat the kitten Pussyfoot. Marc Antony is tossed out, allowing Claude the run of the house. That is, until Marc Antony outwits the cat and makes him sign a confession admitting to his crimes.

Claude was played by voice actor Mel Blanc, and later Joe Alaskey, using a quirky, strangulated voice similar to that of Marvin the Martian, but without Marvin's precise enunciation. While most of the cartoons depict Claude as a silent character, he did speak in "The Hypo-Chondri-Cat", "Cheese Chasers", and only once at the end of "Feline Frame-Up".

Claude's final cartoon was 1962's "Louvre Come Back to Me!" where he is a French cat named Pierre who loves Penelope Pussycat. Jones retired Claude in the early-1960s. He was concentrating on other characters such as Wile E. Coyote. Nevertheless, the character enjoys some popularity as one of Jones' more humorous creations. In the 2006 direct-to-video movie Bah, Humduck! A Looney Tunes Christmas, Claude Cat has a very brief cameo as an employee going home for Christmas. Claude has appeared in the opening to The Looney Tunes Show. He appears in several episodes of New Looney Tunes, such as "Tweet Team" and "DarkBat", where he often teamed up with Sylvester and Pete Puma as a feline comedy trio. Claude appeared in Looney Tunes Cartoons.

One of the versions of Claude Cat was planned to be made as a cameo in the deleted scene "Acme's Funeral" from the 1988 film Who Framed Roger Rabbit. He appears with other animated characters scared when Casper appears at the funeral. [1]

The Looney Tunes Show (intro only) 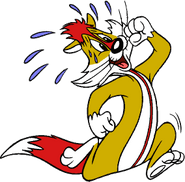 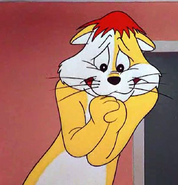 Claude with Sylvester in DarkBat 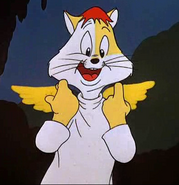 Dressed as a angel