In this version of the story, all of the characters are African American, and speak all of their dialogue in rhyme. The story is set during WWII in the United States, and the original tale's fairy tale wholesomeness is replaced in this film by a hot jazz mentality and sexual overtones. Several scenes unique to Disney's film version of Snow White, such as the wishing-well sequence, the forest full of staring eyes, and the awakening kiss, are directly parodied in this film. The film was intended to have been named So White and de Sebben Dwarfs, which producer Leon Schlesinger thought was too close to the original film's actual title, and had changed to Coal Black and De Sebben Dwarfs.

Clampett intended Coal Black as both a parody of Snow White and a dedication to the all-black jazz musical films popular in the early 1940s. In fact, the idea to produce Coal Black came to Clampett after he saw Duke Ellington's 1941 musical revue Jump for Joy, and Ellington and the cast suggested Clampett make a black musical cartoon. The Clampett unit made a couple of field trips to Club Alabam, a Los Angeles area black club, to get a feel for the music and the dancing, and Clampett cast popular radio actors as the voices of his main three characters. The main character, So White, is voiced by Vivian Dandridge, sister of Dorothy. Danny Webb, voices the Wicked Queen. Leo "Zoot" Watson is the voice of "Prince Chawmin'." Famous jazz musician Louis Armstrong had wanted to voice Prince Chawmin', but was booked on tour.[2] The other characters, including the Sebben Dwarfs, are voiced by standard Warner voice artist Mel Blanc.

Originally, Clampett wanted an all-black band to score the cartoon, the same way Max and Dave Fleischer had Cab Calloway and His Orchestra score the Betty Boop cartoons Minnie the Moocher, The Old Man of the Mountain, and their own version of Snow White. However, Schlesinger refused, and the black band Clampett had hired, Eddie Beals and His Orchestra, only recorded the music for the final kiss sequence. The rest of the film was scored, as was standard for Warner cartoons, by Carl W. Stalling.

In front of a fireplace is a red-tinted silhouette of a large woman holding a young child in her lap. The little black girl asks her "mammy" to tell her the story of "So White an' de Sebben Dwarfs". "Mammy" begins:

"Well, once there was a mean ol' queen. And she lived in a gorgeous castle. And was that ole' gal rich! She was just as rich as she was mean! She had everythang!"

The rich, Wicked Queen then appears, depicted as a "food hoarder", with a large repository of items that were on ration during World War II: rubber, sugar, gin ("Eli Whitney's Cotton Gin" brand) and more. After stuffing her face with candies (from a box marked "Chattanooga Chew-Chews"), she asks her magic mirror to "send her a prince 'bout six feet tall", but when Prince Chawmin' arrives in his flashy car, he declares "that mean ol' queen sho' is a fright / but her gal So White is dyn-a-mite!" Finding So White hard at work doing the laundry, the prince takes her hand and the two swing out into a wild jitterbug. The queen sees this and hires "Murder, Incorporated" to "black-out So White." The assassins arrive in a panel truck that advertises, "We rub out anybody for $1.00; Midgets: 1/2-price; Japs: free". (That $1 in 1943 would be equal to $14.88 in 2019)

The assassins kidnap the girl, but after several unseen "favors" which make the would-be assassins very happy, set her free in the woods unharmed. Just before they drive off, the assassins are seen covered with So White's lipstick, an innuendo as to exactly how she earned her freedom. Wandering through the woods by herself, So White runs into the Sebben Dwarfs, seven diminutive army men in uniform who sing "We're in the Army Now," with two dwarfs singing "it takes us cats ... to catch those rats" at the end, and So White declares in a 1940s swing-style singing voice, "I'm wacky over khaki now!" They immediately recruit her as their squad cook, and she spends her days "fryin' up eggs an' pork chops too" (to the tune of "Five O'Clock Whistle") for the hungry soldiers, as a sign which hangs from her outdoor antique stove reads, "Keep 'em frying," as a sendup of the World War II slogan, "Keep 'Em Flying."

Meanwhile, the queen has learned that So White is still alive, and pumps an apple full of poison which she wants to give to the girl and kill her. Several worms escape the apple as the queen injects it with poison, one carrying a sign that says "Refoogees." The queen disguises herself as an old peddler woman, and arrives at the Sebben Dwarfs' camp and gives So White the poisoned apple. One of the seven dwarfs (modeled on the "Dopey" dwarf in Disney's film) alerts the others that the queen has caused So White to "kick the bucket," and the entire squad hops into its vehicles (a Jeep, a "Beep," and, for "Dopey," a "Peep"). As the queen makes her escape over the hills, the dwarfs load a cannon with both a war shell and "Dopey." The shell sails over to the queen, stops in front of her in mid-air, opens, and "Dopey" appears, knocking the crone out with a mallet.

Even though the queen has been defeated, So White is still dead to the world. The dwarfs note, in spoken rhyme:

"She's outta this world! She's stiff as wood!
She's got it bad, and that ain't good!
There's only one thing that'll remedy this
and dat's Prince Chawmin' and his Dynamite Kiss!"

Upon the dwarfs' invoking of his name, the prince jumps into the scene in a spotlight and promises to "give her a kiss / and it won't be a dud / I'll bring her to life with my special 'Rosebud'!". Wiping his lip and leaning over the girl in preparation, Prince Chawmin' proceeds to give So White a succession of highly aerobic kisses, practically swallowing the girl's face whole in trying to awaken her, but without any luck. Prince Chawmin' keeps frantically kissing So White (his efforts underscored by a solo from Eddie Beale's trumpet player), and the efforts literally take the life out of him as he turns into a withered old man, shrugging his shoulders in defeat (although there seems to be an alternate version of this scene, where he just ages and his face turns into a lighter hue). The "Dopey" dwarf then saunters over to So White, and, to the tune of "You're in the Army Now," lays a kiss on the girl so dynamic that not only does So White wake up, but her eyes become large as saucers and her pigtails fly straight up into the air (depicted in Rod Scribner's typically extreme animation style) as she jumps into the air.

The worn-out and aged Prince asks "Dopey," "Man, what you got that makes So White think you so hot?!" "Dopey" replies, "well, dat is a military secret," and lays another kiss on So White, which sends her pigtails sailing into the air again and causes the red ribbons on them to turn into twin American flags, to several notes of "The Stars and Stripes Forever", and immediately after the kiss, So White shows an obvious "afterglow" in her eyes and her smile.

Being part of the "Censored Eleven", this cartoon has never had an official video release. A Censored 11 DVD was going to be released, however, this release has been held back indefinitely as of March 2012. 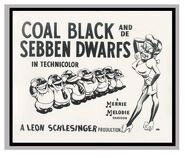 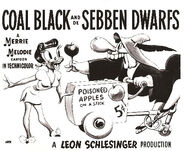 Retrieved from "https://looneytunes.fandom.com/wiki/Coal_Black_and_de_Sebben_Dwarfs?oldid=239322"
Community content is available under CC-BY-SA unless otherwise noted.