Colonel Shuffle is a character in the Looney Tunes stable.

Based in the Southern United States, Colonel Shuffle has been shown as fiercely loyal to this region and deeply offended by anything that he feels reminds him of the North.

He refers to himself specifically by name in "Mississippi Hare" (1949), following a game of poker in which he lost (three queens to four kings) and proceeds to let off a barrage of gunfire. Sometimes he is shown playing a banjo in classic Dixieland style.

Among his foils are Bugs Bunny (who defeated him) and Charlie Dog (whom he defeated) in "Dog Gone South" (1950).

Shuffle played a prison warden in the Tiny Toon Adventures episode "Gang Busters" and a toy company CEO in "Fairy Tales for the 90's".

Shuffle made his last animated appearance in The Sylvester & Tweety Mysteries episode "The Cat Who Knew Too Much", under the name of Colonel Louie Z. Anna, an old rival of Granny's turned villain who tried to kidnap Tweety. 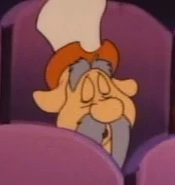 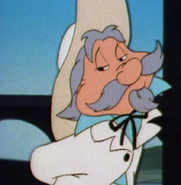