View source
watch 03:01
Wiki Targeted (Games)
Do you like this video?
Play Sound

Commander X2 is a character in Duck Dodgers. He is Duck Dodgers' arch-rival and the commander of the Martian military.

X2 was born 24 July. He hates space bats, and any giant insects. When he first met The New Cadet, he was scared of her when she threatened him. X2 is most terrified of heights.

X2 is in love with the Martian Queen whom he serves. He considers Duck Dodgers to be more of a nuisance than an actual enemy. It appears that he doesn't have a mouth in "Duck Deception" and "The New Cadet". He and Dodgers have worked together a few times.

Marvin was employed by the Martian Queen. He loves her, but she stabbed him in the back completely. Sometimes she is sweet with him; other times she mistreats him. He does evil frequently, but carries out jobs for the queen. In his spare time he sings, does clay work, cleans up his house + ship, sleeps, sits in a sauna, or walks his dog K-9.

His family has been mentioned on occasion. He appears to be close to his mother, to whom he frequently writes. He has a niece named Marcia and she appears in Tiny Toons. He also has an uncle who is a friend of mad scientist. 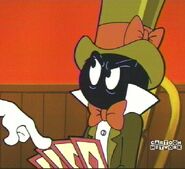