Wile E. Coyote leaves a telephone at the hole of his neighbor, Bugs Bunny. He calls, asking to borrow a cup of diced carrots. Bugs' whiskers twitch as he sarcastically looks at Wile's mailbox ("Wile E. Coyote - Genius"), and realizes what he's up against. He then mocks him: "Are you in, genius? Are you in, capable? In, solent? In, describable? In, bearable?..." Wile grabs Bugs and ties him to a stake as he prepares to cook Bugs, but Bugs gets the upper hand by hopping on the floorboards, setting off a wine cork that, after it ricochets around the room, triggers Wile's wall bed that crushes the Coyote (All to the tune of Raymond Scott's Powerhouse). Bugs makes his getaway and hops back to his hole.

Wile then tries a vacuum cleaner to suck up the rabbit, getting a dynamite decoy instead, before the decoy explodes, he says "well, the boy has talent"; a cannon shot, which Bugs re-directs at the Coyote; and "Quick-Drying Cement". The cement then dries into a cylindrical block. As Wile E. laughs, saying, "What a wonderful way to cement a friendship", he runs right into the block, which tips over on top of him. Bugs then pops out and says, "Well, now he has concrete evidence that I'm a good neighbor".

The final attempt is a ten-billion-volt electric magnet, which Wile E. Coyote turns on after leaving a metal carrot in Bugs' hole (hoping the bunny can eat the carrot and then be pulled by the magnet to his waiting predator). Bugs tricks him and sends the carrot right back at Wile E. Upon releasing the carrot, Bugs' mailbox is also pulled towards the magnet, hitting Wile E. right in the face. To further batter Wile E., Bugs throws out an iron, a frying pan, a garbage bin, and a mallet, as well as his bed and kitchen stove, all of which are attracted to the magnet. However, neither Bugs nor Wile E. expects the magnet to attract everything else with metal properties (including, but not limited to: barbed wire, street lamps, cars, bulldozers, buses, an ocean liner, the Eiffel Tower, satellites, and, finally, a Mercury rocket trying to blast off into space) their way. The rocket lodges itself in Wile's cave and then explodes along with everything else the magnet attracted, blasting Wile E. Coyote into oblivion as Bugs watches from his hole. All Bugs himself can do is remark, "One thing's for sure: we're the first country to get a coyote into orbit." 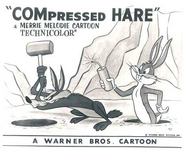 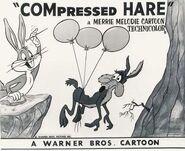 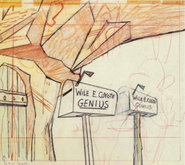