Confusions of a Nutzy Spy

Confusions of a Nutzy Spy

Confusions of a Nutzy Spy is a 1943 Looney Tunes short directed by Norman McCabe.

The title is a parody of the 1939 movie Confessions of a Nazi Spy produced and released by Warner Bros.

Things are shown that make fun of small town prisons and various criminal practices. A bloodhound is trying to sleep, when he is interrupted by a radio broadcast that annoys him to the point that he breaks the radio with a mallet. Porky enters with a paper that has a picture of a wanted Nazi spy on it. The bloodhound eventually sneezes itself and Porky out of the town jail, and it also blows the flyer onto the spy's face. The spy tries to fool Porky into believing that he is not the spy when he comes after him. Eventually, the Nazi's plan to blow up the bridge is revealed, and he activates the bomb timer, after which Porky and the bloodhound work to stop it. Porky eventually captures the bomb and, when he hears its ticking, throws it and runs from the bloodhound, who retrieves it. This sequence continues until the Nazi spy is cornered in an area by the bomb, Just when it is about to explode, it turns out to be a dud. The Nazi is blown to bits by the dud when he slams it on the ground. Up in the clouds, he salutes Hitler and faints. 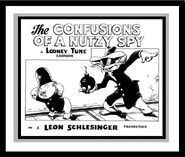 Sketches of the Missing Lynx 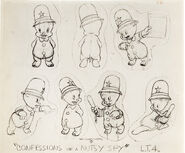 Screenshot of 2021 restoration from iTunes Video