Cool Cat is a "hep" tiger character who appeared in a series of cartoons in the late 1960s during the Warner Bros.-Seven Arts era of Looney Tunes and Merrie Melodies shorts. The character was created by Alex Lovy and debuted in an eponymous cartoon in 1967. This marked a shift from the Warner Bros. Cartoons studio's traditional animation style to one more closely resembling the style used by television animation studios such as Hanna-Barbera and Filmation. F Troop's Larry Storch was Cool Cat's original voice actor.

Cool Cat resembles somewhat both the Pink Panther, whose own cartoons by DePatie-Freleng Enterprises began in the same decade, and Snagglepuss from the Hanna-Barbera studio. In contrast to most of the other Looney Tunes characters, who have come to be seen as fairly timeless, Cool Cat was bery much a product of his time. He usually wore a green neck tie with a matching beret. He spoke '60s-style beatnik slang, and acted like the typically mellow, '60s adolescent. In the first four shorts, he was initially pitted against a fussy, English-accented big-game hunter named Colonel Rimfire, who always carried a blunderbuss. The pairing was intended to be the new Bugs Bunny and Elmer Fudd. In the last classic Looney Tunes short, "Bugged by a Bee", he is a student attending Disco Tech and partaking in sports against the rival college, Hippie University.

The new opening title card used in the sequence preceding his debut was the first to be done for the W-7 Arts series. This last intro title card sequence of the classic era featured a black background, a re-working of "The Merry-Go-Round Broke Down" theme and stylized lettering, such as the W and 7 being conjoined within a stylized shield. He had the distinction of starring in the last Looney Tune and the last Merrie Melodie; the studio shut down not long after the latter's release.

In his first appearance since the classic/W-7 Arts epoch, Cool Cat also had various cameos and/or walk-on roles in the '90s Warner production, The Sylvester & Tweety Mysteries, in one form or another. For example, in the form of a poster, as a passer-by in street scenes, etc. However, these never went noticed by the main cast, with Tweety even commenting once "We just had to get him into this show". He later appeared at the end of Tweety's High-Flying Adventure, removing his human businessman disguise. In these, Cool Cat was voiced by Joe Alaskey and Jim Cummings. He returned twenty years after that in the Looney Tunes Cartoons short "Happy Birthday Bugs Bunny!"

Cool Cat was designed to be contemporary; however, his expressions, style of dress, speech and mannerisms became dated.

To date, Cool Cat, Colonel Rimfire, and Spooky are the only W-7 Arts characters to make any prominent appearances after the classic era shorts, with other characters only getting non-speaking cameos. 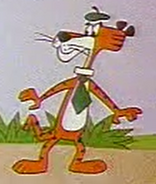 "A Good Nephew Is Hard to Find" 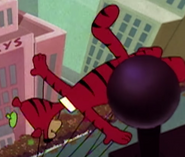 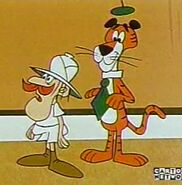 In his Dune Buggy

As a race car driver 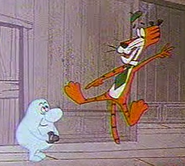 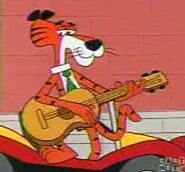 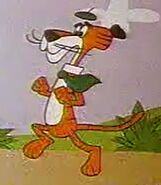