From a high bridge Wile E. Coyote is pouring out his usual ACME Bird Seed bait for the Road Runner below, and intends to use an ACME Bungee Cord he ordered to catch him. On his first two tries, he misses grabbing Road Runner and on his way down a third time (with cutlery in hand), he collides with a gasoline truck and holds on to the tanker for dear life, but only succeeds in taking the gasoline tanker with him, which explodes upon impact.

On his next attempt, the Coyote continuously gets hit by oncoming trucks and eventually gets wound up in the bungee cord on the bridge. He is then freed by a passing tow truck, but crashes through the wall above the tunnel and is then hit by another truck. Road Runner then comes up to taunt him, and the Coyote sees yet another truck coming from behind. Wile E. uses the truck to chase after Road Runner, forgetting about the stretching bungee cord and when he lets go to try and grab him, the Coyote is shot back by the bungee cord recoiling and hits yet another truck in the tunnel. The camera changes shots to the back of the truck with the Looney Tunes endline "That's all Folks!" on it and Wile E. recoils one more time, hitting the screen and sliding off, as the Road Runner speeds off through the tunnel.

The poster of the Looney Tunes short 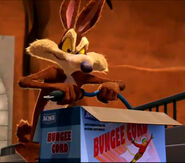 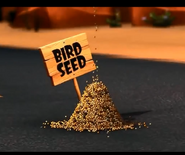 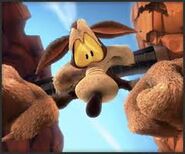 Add a photo to this gallery
Retrieved from "https://looneytunes.fandom.com/wiki/Coyote_Falls?oldid=206484"
Community content is available under CC-BY-SA unless otherwise noted.