Crockett-Doodle-Do is a 1960 Merrie Melodies short directed by Robert McKimson.

The title is a portmanteau of frontiersman Davy Crockett and "Cock-a-doodle-doo," an English representation of a cock crowing.

Foghorn Leghorn is going for a hike in the woods when he notices Egghead Jr. reading Basic Research in the Physical Sciences by Prof. Newt Ronn. Foghorn takes him out in the woods to learn scouting and woodcraft. He tries to light a friction fire with a spindle drill, but Egghead breaks off a twig, strikes it like a match on his buttock, and lights the fire for him. Foghorn says that's impossible and tries it for himself, and sets his own tail on fire.

While Egghead returns to his book, Foghorn carves a duck call. When he blows it however, a pig comes running, knocking Foggy off his feet and into a tree. Egghead carves his own call, which brings three bobbysoxer ducks to swoon over him. Foghorn tries to send a smoke signal but burns a hole in his blanket. Egghead signals back with a neatly typed and signed message in his smoke.

Foghorn rigs a watering can in a tree and tries to fool Egghead with an Indian rain dance. Egghead folds a paper airplane and uses it to seed a small cloud with dry ice, making it rain for real and strike Foggy with lightning, leaving him featherless.

Foghorn shows him how to set up a box trap, but Egghead builds a snare trap. Foghorn scoffs and demonstrates how the snare won't work, but inadvertently sets off a Rube Goldberg-esque trap that springs the rooster up into the air, bounces him off a tree branch, launches him through a chute, down a hollow tree, and deposits him back at the snare, which triggers and hangs Foggy upside-down by his feet. Beaten, Foghorn asks him if he has any more of "those long-haired books." 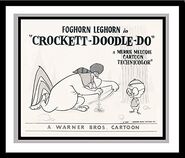 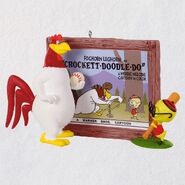 This ornament was available 13 July 2019 at Hallmark stores for a limited time.