A narrator talks about the wonders of nature in the USA; 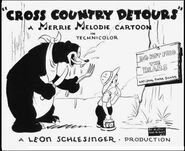 Little girl scares off Gila monster through the split-screen.