Sylvester is sneaking to the doghouse in a bush. He tries to steal a bone outside the doghouse, but the Barnyard Dawg grabs the paw and looks inside the bush to see Sylvester with a flower in his mouth and several more flowers on his head. After Sylvester deliberately whacks Barnyard Dawg on the head with his dog food dish, Barnyard Dawg chases Sylvester on the wall and jumps over a branch, only to get caught by the leash and hangs from the branch by the leash. Sylvester is about to cut the leash with an axe, but Foghorn grabs the blade and Sylvester whacks too hard and vibrates as he goes by the fire wood, and the branch breaks and Barnyard Dawg gets hit on the head and walks off. Foghorn lectures Sylvester to "Bury the hatchet, I say bury the hatchet, but not in anyone's head, boy!" when Sylvester is trying to speak, Sylvester angrily yells "Ah, SHUT UP!" and whacks Foghorn on the head with the bladeless axe and leaves as Foghorn sees stars and still holds the blade. Henry says, "I'm not sure, but this might be a chicken," and drags him as Foghorn asks, "What's the ga-I say what's the gag son? GAG that is! Where are we takin' me, boy? Speak up!" After Henry tells Foghorn that he is a chicken, Foghorn convinces Henery that Sylvester is a chicken. Foghorn sticks Henery in an egg and places it under Sylvester. Sylvester wakes up, thinking he's laid the egg and has become a mother, sings "Rock A Bye Baby" to it then hides the egg when he sees Foghorn coming and Foghorn congratulates Sylvester for laying the egg and Sylvester realizes that "HEY, tomcats can't be Mothers! Cats don't lay eggs! There's something screwy here!" and attempts to detach himself from this egg that suddenly follows him and attaches itself to him and that literally scares Sylvester out of his wits when he thinks the egg is possessed by a ghost. He runs from it and literally does all sorts of things, including running into the dog house belonging to the Barnyard Dawg. The dog pulls the cat out and stomps all over him and walks off. Henery, still in the egg, runs into the dog, which causes the dog to trip and fall over. The dog looks at the egg and then at the camera and ponders "I just takes a step and presto, I lays an egg!" A mother duck, with her ducklings, says to herself, "Presto, and he lays an egg. And to think for fifteen years, I've been doing it the hard way." The egg/Henery finally discovers Sylvester's hiding spot, a barrel, and he starts to attach himself to Sylvester's skin.

Reaching a breaking point, Sylvester comes close to literally smashing the egg with a mallet. Just as the egg is about to be smashed, Henry breaks out and hollers "STOP!!" to which Sylvester literally yanks his head up and down by his ears and grabs his tail and literally yanks on it, causing his head to literally pop up and down on his shoulders because he himself thinks he's crazy. Henry, seeing enough, clobbers Sylvester with a mallet and drags him off. Sylvester wakes up and asks "Say, what's the big idea?!" and Henry warns the "chicken" to not give him any trouble and Sylvester realizes that he's been part of a trick and he leaps up and shows Henry that the actual chicken, "A ROOSTER in fact!", is Foghorn himself. "Rooster? If I'm a rooster-I say if I'm a rooster, I hope to be struck by-" bellows an offended Foghorn, but is interrupted when he is almost struck by lightning and decides "Well, let's put it another way. WAY that is" and an argument arises between Sylvester, Foghorn, and the Dawg as they accuse each other of misleading Henry Hawk. Finally, Henry decides the only way to settle the matter is to see who crows at dawn, and they all agree with an "OKAY!" with Foghorn alone "OKAY, THAT IS!" At dawn the next morning, a sun pops up and rooster crows, but from whom? Sylvester has his mouth open because he typically always has his mouth open, looking dumbfounded, but Barnyard Dawg thinks Sylvester is crowing and walks off after hearing enough. Henery mistakes this for the sound of the rooster and he drags Sylvester away. Foghorn crows out the side of his mouth holding up a how-to book on ventriloquism. Foghorn says, "You gotta-I say you gotta keep on your toes. TOES that is!"

(1987) VHS
Foghorn Leghorn and His Friends 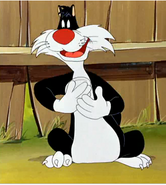 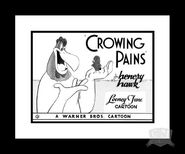 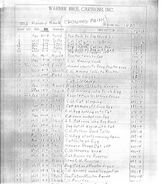 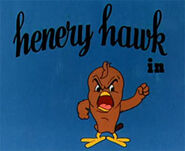 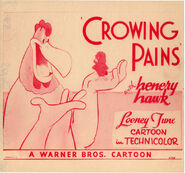 I just takes a step, and presto! I lays an egg!"