Curse of the Monkeybird

Curse of the Monkeybird

Curse of the Monkeybird is a 2020 Looney Tunes Cartoons short.

Porky Pig and Daffy Duck are riding an elephant through the jungle. Porky says that he and Daffy are in search of the Lost Temple of Monkeybird so that they can trade the treasure inside for a reward and pay off their parking tickets in town. However, the trail to the temple, composed of a butterfly and a family of spiders, disperses before their very eyes, prompting Daffy to become hysterical over being lost, though the temple was actually right in front of them all along.

Before they enter the temple, they are told by a skull to "Beware the Monkeybird curse". Porky is instantly frightened by the warning, but Daffy, believing that science will prevail, decides to ignore it and go on ahead, before a troupe of bats and ghosts make him persuade Porky to take the lead. Inside, Porky says to be wary of any booby traps that may lay ahead. Daffy is adamant towards this as he sets off the following traps which brutally injure Porky:

Daffy finds Porky and tells him that they have found the Treasure of the Monkeybird Temple. Unfortunately, as they rush towards it, they discover that the ground is littered with banana skins and Monkeybird Monthly Magazines. Daffy is immediately bitten in the leg by a snake, and pleads with Porky to suck out the venom. It turns out that Daffy has already captured the treasure, and the leg Porky sucks actually belongs to the dreaded Monkeybird, which is a combination of a gorilla and a bird.

Porky and Daffy try to escape on a vine with the treasure, but the Monkeybird blocks their passage by revealing that he can actually fly. The two of them climb up the vine to safety before they unexpectedly skid down a floor-turned-slide. After leaving the slide, they briefly joke with the Monkeybird before resuming the chase and being cornered by the creature. Daffy tries to communicate with the monster by commenting on his facial features and asking to wear his letterman's jacket, which the Monkeybird happily mistakes for a marriage proposal, instantly preparing the ceremony with Porky as the bridesmaid. To the Monkeybird's confusion, Daffy leaves him at the altar by putting him in his own wedding ring before leaving with Porky for town on an airplane fashioned from the treasure chest, two planks of wood for wings, and a banana skin for a propeller.

Crash landing back home, they open the chest to behold a valuable golden egg inside. To their chagrin, the egg hatches, and the treasure is actually dozens of DuckMonkeyBird chicks, who refer to them as "DADDY". Porky then says this was probably the Curse they were warned about.

In Cartoon Network Asia, over forty seconds of scenes are cut: 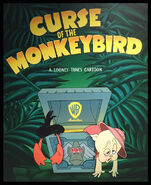 Curse of the Monkeybird Poster