Daffy runs a duplicitous diner near Guadalajara, serving overpriced mouseburgers with rubber mice as substitutes for actual mice, as he hasn't seen one in ages and wants to save on costs. However, one angry cat named El Supremo, or as Daffy calls him, "a sucker", discovers the trick after choking on the rubber mouse in his mouseburger. Furious, he holds Daffy at gunpoint and demands a real mouseburger or else he will shoot him. At this point, Daffy encounters Speedy, whom he tries to catch, cook, and serve to El Supremo.

The mouse discovers his intentions and escapes to the desert, with Daffy in hot pursuit. Daffy is foiled each time by Speedy running up a cactus, Daffy accidentally knocking a cactus on himself, and being scared by Speedy into a trash can, prompting the waste management official to think he has gone crazy after Daffy tells him to put him down from within the can.

Finally, the cat demands his burger within two minutes, forcing Daffy to dress himself as a mouse and put himself in a bun, much to El Supremo's amusement. He states, "Boy, you never know what you'll do until you have a gun pointed at your head". 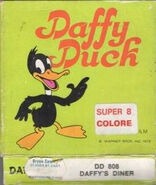