Daffy Duck is a novelty gag salesman operating on the sidewalk of a large city, selling things like flower squirters, a Joe Miller joke book, a rib-tickler, a cheap chicken inspector bag ("It's ... it's ... only 13 cents ...") and a 200-volt electric hand buzzer, even shocking himself with it in the process ("it's ... shocking ..."). However, he fails to sell anything to anyone. But after hearing a radio report declaring that the mirthless buzzsaw tycoon J.P. Cubish is offering a one million dollar reward to anyone who can make him laugh before he passes on, Daffy promptly sets off for the millionaire's home with dollar signs in his eyes.

Upon arriving at Cubish's mansion, Daffy finds that the butler (whom Daffy calls "Jeeves," "Ruggles," "Meadows," and other commonly-used servant names) is not willing to let him in. Daffy tries several ways to get inside (scaling the wall with a grappling hook, swinging in through the window on a rope, etc.), all of which end in failure (in one case, removing the butler's dentures in the process!). Daffy finally sneaks into the house by hiding in a package designed to look like a bottle of champagne (which the butler tries to keep for himself). Daffy ran for his life as the butler tried to kill him using an axe and cannon. Daffy climbs to the top of the building, only to run into the butler again ("Whoops. How are things in Glocca Morra?"). As the butler corners Daffy ("Once and for all, I'm going to..."), the wily duck starts interrogating the butler a la Humphrey Bogart ("Not so fast, my man, Goddfrey! It becomes increasingly apparent that I'm not wanted around here."), suspecting him of not wanting Cubish to return to his good health ("Are we to assume that there is anything significant in this attitude of yours? That A: A butler might not want his master to recover his good health. That B: Said butler should endeavor to remove from the premises the only person capable of restoring said health, to said master."), and even accusing the butler of attempted murder ("Where were you, the night of April the 16th? A likely story! I see it all now. You and the upstairs maid! 'Do the old boy in', you said! 'Elderberry wine and old lace', you said! 'Then, the quick getaway', you said! Rio de Janerio, tropical nights, romance and a heavy bank account! But you weren't smart enough John, alias Johnny, alias Jack, alias Jacky! Phew! What's Humphrey Bogart got that I ain't got?"). Ultimately, Daffy tricks the jittery butler into fleeing the house in disguise, so as not to be arrested. ("But just to show you I'm not all copper, I'm gonna give you a ten-minute head start!", "Don't try to thank me now, get going! Hurry! They're on your trail! Run! Out this way! [screams] And stay on the straight and narrow!")

At last, Daffy makes it to Cubish's bedroom, but before he can even unpack his novelty items, he slips on a rug and falls on a tray of food, covering himself in cake. Cubish finds this sight hilarious and laughs uproariously. In the end, Cubish keeps Daffy on hand as his personal jester, merrily throwing pies at the duck's face while he stands against a target. "It's a living," Daffy asides before he is hit in the face with one last pie. 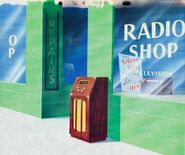 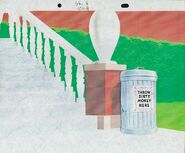