In a large eastern city, the residents are terrified and the police are baffled because someone has been drawing mustaches on all the ads in sight. Daffy eventually asides that he is the guilty party.

Policeman Porky Pig is set as a "booby trap"; he's holding up a picture frame around his own face. Daffy manages to draw a mustache on Porky's face and run off, and Porky gives chase. Daffy runs off to a rapid transit/subway platform, tricks Porky into getting on the arriving train, and escapes.

Later, Porky, having come across more of Daffy's work, including a mustache on a picture of Bugs Bunny, sees Daffy, a rope around his waist, painting a mustache on a giant billboard face. Porky gives chase and gets up to the billboard as Daffy is singing "She was an acrobat's daughter" while still swinging from the rope. Porky clubs Daffy in the head, and Daffy wanders to the edge. He jumps and seemingly falls to his death, but in fact stops on the ledge around the roof. Porky chases Daffy around the ledge.

The chase ends back on the roof, where both of them crash through a skylight and Daffy, again, wanders off. Porky chases Daffy through the building, finally spotting Daffy inside a mail chute. He races downstairs to pull him out. Daffy arrives to "arrest" him for "stealing mail" and slaps handcuffs on himself and Porky, and then paints another mustache on him. But this time, Daffy is clubbed by Porky while still handcuffed to him.

Daffy ends up in court a judge and pleads for mercy. With the jury composed of mustached Jerry Colonna all on his side, Daffy swears never again to draw another mustache before declaring that he's "doing beards now!" He then proceeds to draw a beard on the judge and draws paint over the screen until it's all black. 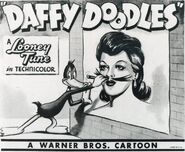 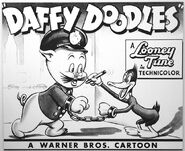