Daffy Duck's Movie: Fantastic Island is a 1983 Looney Tunes film with a compilation of classic Warner Bros. cartoon shorts and animated bridging sequences, hosted by Daffy Duck and Speedy Gonzales. This was the first Looney Tunes compilation film to center on Daffy Duck, as the previous ones had centered on Bugs Bunny.

A note in the end credits dedicates the film to animator and story man, John Dunn, "who inspired it."[1] Dunn died of heart failure in San Fernando, California on January 17, 1983, six months before the film's release. This film was released on DVD in North America for the first time on November 18, 2014.

Daffy Duck and Speedy Gonzales are shipwrecked on a desert island for months with nothing on it but a coconut tree. Daffy is sick and tired of eating coconuts and losing his sanity. They discover a treasure map which leads them to a magical, talking wishing well. The greedy Daffy proposes to use the power of the well, which obeys the commands of whoever holds the map. Rather than simply wishing for a heap of wealth, Daffy figures he can make himself and Speedy rich by transforming the barren island into a verdant tourist paradise and selling other people wishes for a hefty fee. Speedy and Daffy attire themselves in the white suits worn by Tattoo and Roarke in the television show Fantasy Island, with Speedy exclaiming "da plane, da plane" as an airplane carrying various Looney Tunes characters arrives on the island. As the customers step up for their chance at the well, their wishes are fulfilled through the events of a classic Looney Tunes cartoon.

Meanwhile, pirate Yosemite Sam and his first mate, the Tasmanian Devil, search for the map, which originally belonged to them. They had earlier lost their ship in a battle with Bugs Bunny. With a single black feather for a clue, they eventually find out that Daffy took it. In their pursuit of Daffy and Speedy, Sam inadvertently chases the former into volcanic soil. The map is lost to all because of this, causing the island to revert to what it once was. Daffy, Speedy, Sam, and Taz are trapped on the once-again-deserted island. The well gives them three wishes individually, but warns them to use them wisely, for they are the last wishes it will ever grant. Daffy and Speedy waste their wishes, Speedy wishing for a burrito, then Daffy angrily responding by wishing the burrito was stuck on the end of Speedy's nose. Daffy asks Sam to wish the burrito off Speedy's nose, but discovers that Sam already wished for a ship, abandoning Daffy and telling them after he sinks Bugs, he'll come back and pick the pair up. Daffy, now furious, shouts his catchphrase at Sam and Taz. The wishing well signs off with "That's all, folks!" 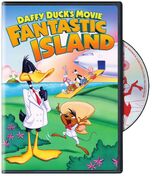