Egghead (in a voice imitating radio comic Joe Penner) is annoyed by a rotoscoped shadowman in the audience who doesn't sit down. Egghead shoots the audience member and the member falls after going through extended "death throes". Egghead hears a call from the grass, and out comes Daffy Duck biting his nose (just like he did to Porky Pig in "Porky's Duck Hunt"). While fighting, a tortoise (with a voice imitating radio comic Parkyakarkus) comes and tries to give Daffy and Egghead new weapons. When the tortoise goes away, Egghead uses his real gun and Daffy tries to make him shoot the apple on his head. Egghead misses all the times, even when Daffy's near him, so Daffy puts a blind sign and a cup of pencils and the disguise glasses on Egghead, with Daffy saying, "Too bad." Daffy then walks away and sings a song by himself, in a set-piece drawn in a different style from the rest of the cartoon, and also containing the subdued, early form of Daffy's lisp, which is absent in the rest of the film:

Daffy then shakes hands with his reflection from the lake and they both dive back into the water.

Later, Egghead finally catches Daffy, using a glove which knocks Daffy on the head. Egghead jumps for joy, until an ambulance comes. A duck comes out and thanks Egghead for catching Daffy. The duck describes Daffy as "Crazy! Looney-tuney! and more importantly 100% nuts!!" However, the two ducks start acting crazy again, and Egghead acts crazy himself.

Egghead shooting an audience member, a scene that has been censored on the WB and most Cartoon Network and Boomerang feeds

The turtle makes Daffy and Egghead duel with guns

The Nut-House Duck thanks Egghead for capturing Daffy 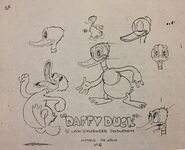