Porky and Barnyard Dawg are hunting ducks. Daffy sneaks up behind them and empties the gunpowder from their shells, then walks off with the phrase "Duck hunters is the cwaziest peoples!" (a reference to Lew Lehr's Fox Movietone News catchphrase, "Monkeys is the cwaziest people."). When Porky takes aim at Daffy, Daffy is able to continue taunting him, even dancing as a can-can dancer with a bullseye on his rear end - to no ill effect. Porky sends his dog to get Daffy, and the dog decides to trick Daffy, crying loudly that Porky will torture him if he doesn't come back with a duck. Daffy agrees to let the dog "capture" him and carry him back to Porky.

Once they get back to Porky's house, Porky throws Daffy in the deep freeze and goes upstairs for a nap. Once out of sight, Daffy starts knocking on the freezer door to be let out. After a brief fight between his good and bad conscience, the dog lets Daffy out of the freezer. Daffy tries to leave the house---claiming, in a non sequitur, "There's a guy waitin' for me!"---but is blocked by the dog, who tries to shush him, but he rudely refuses. After making a bunch of noise, Daffy jumps into the dog's mouth just as Porky comes to see what all the noise is about. Upon coming down, Porky thinks the dog is trying to steal the duck for himself, and subsequently beats him. Porky then throws Daffy back in the freezer. The dog is tired of Daffy sassing him, but the duck continues to act silly around him (dressed in heavy winter gear, screaming about needing to get medicine through "tons of ice! NO ESCAPE!", then dead-panning, "How's things been with you?"). When Porky appears, wondering what all the noise is about, Daffy once again jumps into the dog's mouth. A furious Porky once again thinks his dog is stealing Daffy, and pounds him once again. Porky then places Daffy back into the freezer.

Finally, the dog has had enough of Daffy's immaturity and grabs an axe to finish him off. After a chase through the house, Porky, finally having enough of the dog's so-called shenanigans, comes in and threatens the dog's life if Daffy isn't in the freezer. Porky opens the freezer, but both are shocked when Daffy, dressed as Santa Claus, jumps out and starts singing "Jingle Bells". Both Porky and the dog start singing along, until Porky sees that the current month is April. Porky knocks Daffy down and is ready to use the axe until he sees a stamp on Daffy: "Do not open 'till Xmas." Daffy smiles and says, "Christmas. By then, I'll figure a way out of this mess!" 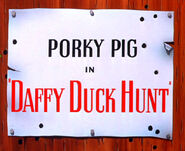 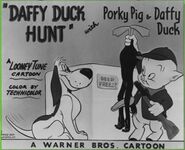 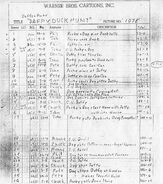 The month of April has 31 days?