The title is a play on the old cliché, "George Washington slept here" - also the title of a 1942 film.

Porky is looking all over the big city for a hotel room, but due to a convention there are no vacancies anywhere; flophouses, a hotel under construction, and a doghouse have been affected.

When a Hotel Manager uses a sign to reveal one room left, he runs back in as the entire crowd tries to cram themselves in, ignoring the manager's pleas to calm down. The manager is relieved when Porky is the only one that enters, and he finally secures a room that he will have to share with Daffy Duck, who comes in loudly, and claims to have brought along a friend, a six-foot, invisible kangaroo named "Hymie", a parody of Harvey. Daffy proceeds to sing a high-energy version of "I'm Just Wild About Hymie" (instead of "Harry"), although he omits the lines about "the heavenly blisses of his kisses" (which he had retained in "Yankee Doodle Daffy") and after singing the first lines goes into singing "For He's a Jolly Good Fellow" and follows this by spelling Hymie's name multiple times, and then chugging back and forth like a train while smoking a cigar. Porky is skeptical about the existence of such a kangaroo. To demonstrate Hymie's existence, Daffy climbs into Hymie's "pouch", disappearing except for his head and neck, and bounces around the room as Hymie hops; why Hymie, described as a male kangaroo, has a pouch (which is normally found on female kangaroos) is simply another oddity to his existence. Porky still doesn't believe Hymie exists.

After seeing Hymie out the door, Daffy spends the rest of the night annoying Porky: pestering him with questions, hogging the blanket, spilling water from a glass so Porky momentarily thinks the duck has wet the bed, and startling Porky with his literally cold feet sending both Porky and Daffy flying out of bed. At one point, the exasperated Porky stuffs Daffy into a pillow case, insulting him, "You web-footed, n-n-no good, two-timing, d-d-double-crossing, d-d-double-dealing, unsanitary old snake in the grass!" The duck takes particular offense to being called "unsanitary" and drops him out the window, some thirty stories, resulting in a loud crash. Porky then goes back to bed. Daffy returns bandaged, but shakes them off and prepares to take vengeance.

Daffy imitates an alarm clock, then tricks the half-asleep pig into stepping out of a window, still in his nightshirt, plus coat and hat, thinking he's boarding a train. Daffy in conductor's cap repeats the famous Mel Blanc joke from the radio version of The Jack Benny Show, with Daffy announcing "Train leaving on Track 5 for Anaheim, Azusa and Cuc—amonga!" Daffy pulls the shade, saying it's "too gruesome" to watch. Suddenly he hears train noises, opens the shade, and is stunned to see the still-drowsy Porky somehow pulling away on a train and waving at Daffy, to the tune of "California, Here I Come". Daffy turns and says, "Hey, that's silly! ... I should have bought him some magazines to read on the trip!" Then he bounces all around the room, "Hoo-Hoo!"-ing wildly. 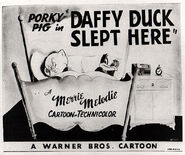 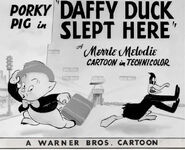