Daffy Duck and Porky Pig Meet the Groovie Goolies is a 1972 animated one-hour TV-movie (with a live-action segment near the end) that was part of The ABC Saturday Superstar Movie.

At Horrible Hall, the Groovie Goolies are watching a television interview in which Daffy’s talking about his new movie, when their program is interrupted by a ghoulish being calling himself The Phantom of the Flickers; he announces his intention to destroy every film that Daffy Duck and company ever made, including their current King Arthur film. Being a huge fan of Daffy, Frankie goes to Hollywood to offer his help, and the other Horrible Hall residents go along with him.

Mayhem ensues when the Looneys and the Goolies first meet, but they eventually settle down and continue filming the movie. The Phantom suddenly grabs the film and, disguised as Hauntleroy, tries to escape from the Goolies by running through a magic mirror into “Mad Mirror Land” (i.e., the real world). Frankie, Drac, and Wolfie chase after him, and after a cartoonishly slapstick pursuit they bring the Phantom and the film back to their world.

The Phantom turns out to be Drac’s long-lost uncle Claude Chaney, a formerly famous silent film actor who was acting out of anger over black-and-white films being replaced by color films. Daffy gives Claude a job, the movie wins an award, and the Goolies head for home.

While most of the Warner Bros. characters were drawn well and were voiced by Mel Blanc, the special is widely panned by many Looney Tunes fans because of its limited animation as well as a weak storyline.

This movie has never been officially released on home video (due to various rights issues), but traders on the Internet have been recording and selling DVDs of this film, most of which were originally black-and-white kinescopes of the original broadcast. Non-official copies of the original color production have also emerged. In 2013, a restored version of the special was aired in Germany on Anixe. 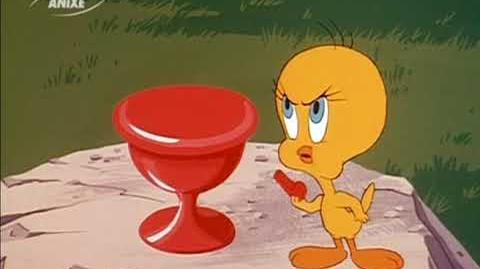 Retrieved from "https://looneytunes.fandom.com/wiki/Daffy_Duck_and_Porky_Pig_Meet_the_Groovie_Goolies?oldid=194123"
Community content is available under CC-BY-SA unless otherwise noted.