This article is about the 1938 short. For the the 1994 Sega Mega Drive game, see Daffy Duck in Hollywood (Game).

Daffy Duck in Hollywood is a 1938 Merrie Melodies short directed by Tex Avery.

At Wonder Studios, producer I.M. Stupendous is interrupted by Daffy asking if he needs a duck actor. He quickly responds "No!" and states, "Y'know, that duck's screwy". The phone rings and Daffy pops out of it saying "You're correct, absolutely correct!" Stupendous then phones Director Von Hemberger (a parody on Josef von Sternberg who bears some resemblance to Porky Pig with Piggy Hamhock's shape, except for he speaks with a German accent, rolling his r's and not stuttering) and orders him to finish the picture he's working on that day.

On the set, all the crew rushes to follow his orders, including lighting his cigarette, which they all do at once so he must light it himself. Daffy then walks up and starts smoking the cigarette, spelling out Warner Bros. ("Just givin' my bosses a plug", Daffy tells the audience, "I've got an option comin' up!!") Hemberger checks the sound, and Daffy whistles into the microphone; he checks the lights, which Daffy has switched with the emergency fire hose. When the cameras roll, they start spitting out bullets Daffy planted. Hemberger begins crying because it resulted the movie he's making to turn out into a "gangster picture" which was not what he wanted in the first place. Daffy sympathetically gives him a gift, promising to "stop being screwy"; however, he didn't mean what he said as when Hemberger opens the gift Daffy simply pinches his nose again and runs off hooting wildly.

As they begin filming, a typical romantic scene between a rooster and hen plays out. When the inevitable kiss comes up, Daffy kisses the hen; he is so excited that he does it again. The time being noon, Hemberger decides to have lunch. "I'll take turkey with all the trrrrimmings!" However, Daffy is under the platter, and pinches his nose again. In the film room, Daffy begins clipping and pasting together random film clips ("WOW! I'll make him a REAL feature! Woo-hoo!"), which he switches out with Hemberger's film. Hemberger shows his "film", which contains ridiculous live-action clips of random scenes tied together, such as gold mining, square dancing, the World Championship Fight in Madison Round Garden, etc. Despite Hemberger's obvious (and justified) fear, Stupendous approves of the film, which causes Hemberger to faint.

Soon enough, Daffy is made a new film director, uttering the same line about having turkey, complete with accent and Hemberger's clothing. Hemberger, who apparently has lost his sanity at the end of the previous scene, now imitates Daffy and hides under the platter, pinching his nose and hooting wildly like Daffy.

(1991) LaserDisc
The Golden Age of Looney Tunes: Volume 1, Side 9, Hooray for Hollywood 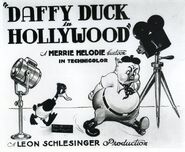 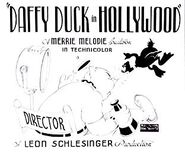