The title is a play on the rental chain, Abbey Rents.

Speedy Gonzales is terrorizing the residents at a Mexican rest home for neurotic cats. Dr. Ben Crazy, a spoof of Dr. Ben Casey, calls Daffy Duck to rent a rodent trap. To capture Speedy, Daffy brings over a robot named Herman and tells the doctor to insert twenty-five cents, but Herman bites him when he inserts a slug instead. The doctor tells Daffy that he can name his own price if he gets rid of Speedy. Daffy then takes Herman down the hall to look for Speedy. Speedy takes a piece of cheese from a refrigerator compartment of Herman, alarming Daffy and making him attach a speedometer and radar on Herman to go after the mouse. Herman easily catches Speedy, but when Daffy thinks out loud about all the money he'll make without having to share it, Herman lets him go. The robot responds "Unfair... fifty-fifty split... or catch your own mice". Daffy reluctantly agrees to split the money with Herman.

Outside, Speedy is calling someone on a telephone pole. Daffy chases him across the wires until he loses his balance and gets zapped holding both ends of the wires. Completely defeathered, Daffy continues to declare revenge against Speedy. Next, Daffy dresses as a female mouse to lure Speedy out of hiding. However, Speedy points Herman's rodent radar at Daffy so the robot repeatedly runs over Daffy. Daffy, twisted out of shape, gives Herman a final warning that if he messes up again, his batteries will be taken out.

Lastly, Speedy invites in his cousin Ramon, the biggest rat in Tijuana, and Speedy asks that he should chase him instead. As Speedy escapes, Daffy thinks going for a big catch is more worth it, so he switches Herman's mode to hunt for a rat instead of a mouse. However, when Herman looks at Ramon, he is scared and chickens out. Daffy then attempts to capture the rat himself, but the rat shows up entirely enormous and macho, causing Daffy to get caught into his own mousetrap. Daffy wants to continue trying to capture the mice, but Herman revolts. "What do you mean... we?" Daffy reports back to Dr. Crazy, but he is beaten up and thrown out of the window of the office for causing Herman to scare all of the cats now. Daffy responds, "Oh, what a revolting development," and shakes his head. 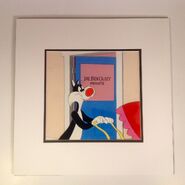