Daniel Michael "Danny" Devito, Jr. (born 17 November 1944) is an American actor, comedian, director, and producer. He is best known for his role as Louie De Palma in Taxi, for which he won a Golden Globe and an Emmy.

He voiced Mr. Swackhammer in the 1996 movie Space Jam. 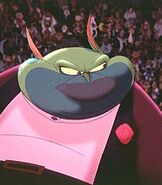 Mr. Swackhammer
(Space Jam)
Add a photo to this gallery
Retrieved from "https://looneytunes.fandom.com/wiki/Danny_DeVito?oldid=246657"
Community content is available under CC-BY-SA unless otherwise noted.