David "Danny" Weberman (24 May 1906 - 16 September 1983) was an American actor, voice actor, radio mimic, and impressionist. He is known for his voice work during the Golden Age of Animation at cartoon studios in Hollywood including Walt Disney Productions, Leon Schlesinger Productions, MGM, Walter Lantz Productions, and Screen Gems.

Webb was born David Weberman in New York City, the third child of Herman and Lena Weberman. His father emigrated to America from Budapest in 1887 and was in the fur business as a cutter and a salesman.

When Webb arrived in Hollywood, he was using the name Dave Weber. He did celebrity impersonations in the Burns & Allen anniversary show, along with doing voice work for a Screen Gems cartoon called "Sing Time", where he impersonated Bing Crosby, Rudy Vallee, Eddie Cantor, Andy Devine and others.[1]

He started working for Warner Bros. in the mid 1930s, and his first cartoon was "The CooCoo Nut Grove." He also voiced Egghead in "Daffy Duck & Egghead" and did voices for the 1939 Merrie Melodies "A Day at the Zoo".

Webb, for a brief time, voiced the Disney character Goofy after Pinto Colvig had a falling out with Walt Disney and left the studio to work for Max Fleischer's studio in Miami.[2] In addition to voicing Goofy for Disney, Webb also did voice work for the 1938 Silly Symphony "Mother Goose Goes Hollywood" where he celebrity impersonations of Eddie Cantor, Charlie McCarthy, Joe Penner, Edward G. Robinson, Fats Waller, and Stepin Fetchit.[3][4]

In 1941, after Mel Blanc signed a contract with Leon Schlesinger in which he exclusively did voice work for Warner Bros., Webb became the first person to succeed Blanc as the voice of Woody Woodpecker. He voiced the character for two shorts until he enlisted in the army and was succeeded by Kent Rogers.

Webb enlisted in the U.S. Army Signal Corps, worked his way up to staff sergeant, and ended up entertaining troops in North Africa. Dwight D. Eisenhower was sufficiently impressed by his technique to deem him as "Comedy Commando", a tag which stuck around for several years after World War II had ended. Webb later returned to radio, became the voice of Sad Sack, hosted the quiz show Guess Who, and then had a minor career on local television sometime after 1951.

Webb died at age 77. According to his nephew, he died from Parkinson's disease. He remained a bachelor throughout his life as he couldn't find a wife religious enough to please his parents.[1] 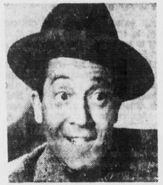