Dave Mustaine is an American musician. He is best known as the founder, guitarist, and lead singer of the American thrash metal band Megadeth. He was inducted into the Duck Dodgers universe and became an ally of Daffy Duck. His first appearance was in the episode In Space, No One Can Hear You Rock / Ridealong Calamity of the 3rd season.

Once the Martian empire starts turning Earth's music into easy listening jazz using a saxophone-like machine, Duck Dodgers thinks about overloading the machine with loud music. He said things would be easier with Dave Mustaine, who "put the heavy in 'heavy metal'", but given he was from the 20th\21st century, Dave's not around anymore. Dr. I.Q. Hi then decides to take Mustaine's frozen body from the "Rock N' Roll History Museum", and the Galactic Protectorate thaws him on the ship's microwave oven. Dave Mustaine is brought back to life, but doesn't remember anything, and a documentary Duck Dodgers recorded on him - claiming he was genetically engineered in a lab and raised by wolverines - does not help. Dodgers gives some metal lessons to Mustaine, I.Q. Hi and the Eager Space Cadet, as they would be Dave's backup band.

The confrontation with the Martians started with Dodgers alone as "Megaduck", before the Cadet called for "Megadeth" and Dave gets his memories back, as the rethawed other members of his band start a performance. Dr. I.Q. Hi also installed a laser cannon on Dave's guitar, which helped in destructing Martian ships. 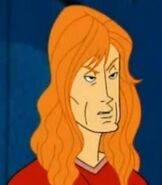 Add a photo to this gallery
Retrieved from "https://looneytunes.fandom.com/wiki/Dave_Mustaine?oldid=201643"
Community content is available under CC-BY-SA unless otherwise noted.