Deduce, You Say is a 1956 Looney Tunes short directed by Chuck Jones and written by Michael Maltese.

The title is a play on the phrase "the deuce you say," and "deduce" refers to Sherlock Holmes' penchant for deductive reasoning.

Porky explains that he (as Mr. Watkins) and Daffy (as Dorlock Holmes) live on Beeker St. in London. Inside their apartment, Daffy is busily engaged in deduction... tax deduction, that is, hoping to write off such costs as "taxi fares, to and from murders." Following a knock on the door, a mailman falls into their apartment. While Daffy attributes it to curare, a type of poison, the mailman chides him for not fixing the step, at which point Holmes declares that the mailman will get no gratuity. The letter identifies that there is a criminal on the loose named The Shropshire Slasher.

Daffy and Porky go to a bar where the Slasher is known to hang out. Daffy's attempts to gather clues land darts in his bill. When the Shropshire Slasher is finally revealed, Daffy repeatedly tries to deal with the man and cajoles and threatens him, but he proves much stronger and always injures Daffy; meanwhile, Porky speaks reasonably to the suspect and he not only willing divulges his identity but is peacefully persuaded to turn himself in to the police.

Just then, a woman arrives selling flowers. Daffy accuses her of selling them without a license and threatens to arrest her. The Shropshire Slasher moans "Mother!" Before Daffy has time to consider what has happened, the Shropshire Slasher grabs him by the neck and starts shaking him violently, causing all of Daffy's possessions to fall out of his pockets. The Shropshire Slasher and his mother then leave. Porky asks a disheveled Daffy what school he learned to be a detective. Daffy answers "Elementary, my dear Watkins. Elementary." 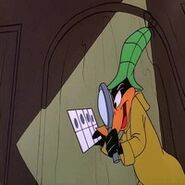 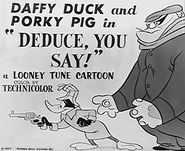 Lobby Card
Add a photo to this gallery
Retrieved from "https://looneytunes.fandom.com/wiki/Deduce,_You_Say?oldid=184029"
Community content is available under CC-BY-SA unless otherwise noted.