Desert Demolition is a 1995 video game that was released for the Sega Genesis.

Players get a choice between playing as either:

Wile E. Coyote (Canis - Ravenous) - Players get to use his tricks which he uses in the Looney Tunes cartoons. By jumping into an Acme box, players can fly in his green flyer suit, skate, get springs on his feet to jump and so on. Catching up to the Road Runner earns the player various benefits though this is not required to complete the level.

Road Runner (Speedicus - Birdicus) - Players must try to escape from Wile E Coyote and complete the level by getting to the other end. If players get caught by Wile E Coyote, they lose health. Road Runner can scare Wile E Coyote by using his trademark "beep beep" catchphrase or running him over, which gives the player items.

Sometimes, Wile E Coyote and the Road Runner share the same levels when playing as them. Other times they don't. Each stage is split up into 2 parts. There are also bonus levels after each mission if the player gets 125 stamps. Looney Tunes stars make a cameo appearance in these bonus stages. Both characters can jump and run faster than normal by getting certain boosts.

There are a total of six levels in this game, five normal stages and a Boss Stage at the end.

Buttes and Ladders (Road Runner's First Stage, Wile E.'s Second Stage)- A village and a tightrope are the main focus. Sam Sheepdog makes an appearance in the bonus level.

The rest of these stages go on as normal.

Karl's Bad Caverns- This level takes place in a cavern, where Wile can use drills and escalators to get to the bottom. Sylvester and Tweety make an appearance on the bonus level.

Granite Gulch- Resembles the first level, but at night time. Also, a flying stage for Wile. The bonus level consists of going on logs through the water, where Elmer Fudd constantly shoots Daffy Duck. (A reference to the "Hunting Trilogy" cartoons)

ACME Factory(Grand Finale)- The Road Runner or Wile E. Coyote uses a forklift to pursue the former or latter character. This is the only Boss Stage in the entire game.

Rocket Skates: The skates have a different design, but still have the same statistics: They help you go really fast.

Bat-Man's Outfit: In this outfit, you'll be able to fly to high places.

Umbrella: A tiny umbrella used to gently float down without falling.

Jack-Hammer: Used to break through rocks and dig holes. 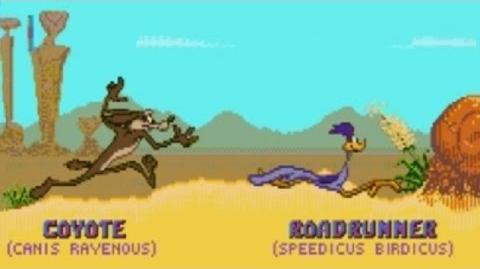 Retrieved from "https://looneytunes.fandom.com/wiki/Desert_Demolition?oldid=205480"
Community content is available under CC-BY-SA unless otherwise noted.