Yosemite Sam robs the Last National Bank in town and erases the assets listed on the window, leaving only eight cents. The bank manager presses the alarm button. Sam jumps into his car and drives to the airport with plans to hijack a plane to another country, where the police won't find him.

The airport happens to be having an aircraft surplus sale and Bugs Bunny is taking a look at the biggest airplane on the lot, thinking of buying it. Bugs gets into the cockpit and starts pretending to be a World War Two pilot just as Sam comes in, assumes Bugs is the pilot, and orders him, at gunpoint, to get going. Before Bugs can protest that he ain't the pilot, Sam threatens to blow his head off. Bugs finds the starter right away, and as the plane goes down the highway, Bugs makes the plane go straight up to avoid a collision with a skyscraper, and straight down to avoid a collision with the moon, causing Sam, both times, to fall to the tail and the nose.

Once Sam sees the Earth coming up and that Bugs is reading a "How To Fly" book, he begs Bugs to read faster or else be blasted. Bugs, however, refuses to look up "any more arguments" because of Sam's mean talk and orders him to apologize. Sam, upon seeing the United States coming up, apologizes right away and Bugs presses the button to "robot pilot." A robot does come out, but chickens out by grabbing a parachute and jumping out of the plane.

With just one parachute left, Bugs decides that they will have to draw straws to see who gets it, but Sam cheats by telling Bugs to draw the straws so that he can grab the parachute. Sam jumps out of the plane and once a safe distance away, he lifts up the back flap, but camping goods fly out, revealing what Sam grabbed was a knapsack. Sam then crashes down into the ground, while Bugs manages to stop the plane in midair by pulling an "air brake" lever.

After his crash into the ground, Sam goes down a spiral escalator to Hell, where he is greeted by the Head Devil, Satan. Sam introduces himself, to which Satan discovers in the book of life that Sam has been a bad boy, although Sam protests that it was Bugs that made him go to Hell. Satan tells Sam that he's after Bugs as well, and since Sam has a connection with Bugs, the Head Devil makes a deal; if Sam brings Bugs to Hell, he will be set free, but if he fails, he will remain in Hell forever. Sam gladly accepts the deal and the Head Devil sends him back to the world of the living.

Back on Earth, Sam discovers from a poster that Bugs is to star in a movie titled Ben Hare, a pun on Ben-Hur, and dresses up as a Roman Centurion. During the shooting, Bugs, dressed up as a legionary, realizes his cue is up next, but Sam comes up and tells Bugs that he has a long overdue date with the Head Devil down in Hell and tries to slice him with a sword, only to miss him. Commenting that Sam has flipped his lid, Bugs runs into the Coliseum set and Sam gives chase.

Both run into a pit of sleeping lions, which they sneak through. Bugs, having got out first, lowers in a modern alarm clock, which rings in front of Sam and wakes up the lions. Bugs then shuts the door above so that the lions can thrash Sam good. Sam manages to escape the set, but the lions pursue him to a cliff, with a river below. Faced with an awkward dilemma of death by jumping off the cliff or death by lions, Sam hastily picks the river and jumps off the cliff, only to crash land back into Hell.

When Sam comes back to Hell, Satan discovers that Sam has not brought back his replacement. Sam begs Satan to give him another chance, which the Head Devil gladly accepts and sends him back to the world of the living.

Back on Earth, Sam shows up in the Sahara Desert, riding a stupid camel that will not "whoa" on cue, so Sam hits it over the head with his gun. Seeing Bugs, Sam starts firing his gun at him, but Bugs manages to escape into an abandoned Foreign Legion post. Sam immediately tries to chisel his way in by hammering out the cement on a stone brick, but when he pulls out the stone brick, he discovers that Bugs has placed a cannon in wait for him. Sam tries to push the brick back into proper place, but Bugs fires the cannon, blasting Sam and the brick through a dune and tree, and straight back to Hell.

When Sam slides back into Hell, Satan sees that Sam still has not brought Bugs back with him and decides to give him one more chance. Sam, however, has had enough of these backfired attempts and tells Satan to get Bugs himself and announces that he is staying in Hell. Sam then rushes away, puts on a devil's suit, comes back, and starts laughing maniacally. 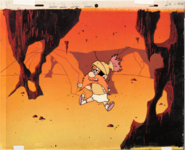