Sylvester and his friend, which is an orange cat, are being chased by a bulldog named Wellington. The chase comes to a stop when the dog is visited by his mistress, who forces him to deliver a package to Uncle Louie, telling him, "And don't let go of it or else!" The cats take advantage of this and torment him.

First, they smash an egg right in Wellington's face, then hit him with a garbage can, tie him up to a train, run over him, throw him in the river, and lastly flatter him with a steamroller. When Wellington delivers the package, he finds out that it contains dinner for the two cats. 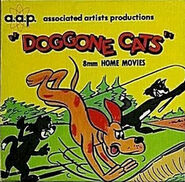 On Cartoon Network, Boomerang (TV only; the gag is retained on the streaming service)[1], The WB, and MeTV, the scene of Wellington harassing the cats by banging trash can lids against the can they're in and Wellington's mistress yelling at him to come to her was shortened to remove a trash can lid landing on Wellington's head and Wellington briefly impersonating a Chinese peasant. Coincidentally, the scene of Wellington falling backward into a cigar store Indian statue and the statue stuffing cigars in his mouth was left in on all three channels, despite all four channels having a history of editing Native American stereotypes and, in the cases of Cartoon Network, Boomerang, and The WB, scenes of characters smoking tobacco products.

Screenshot of the 2021 restoration from MeTV